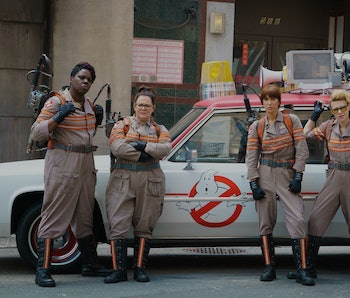 As we draw closer to the release of the hotly contested and exhaustingly promoted new Ghostbusters film, aka Lady Ghostbusters, most of us are fervently hoping it will overcome its identity crisis and awful theme song and actually turn out to be funny.

Although many have insisted the furor over the reboot, which features an all star and, yes, all-female, cast, isn’t sexist, it is totally sexist. Despite the incremental but, eh, noticeable shift toward gender parity in Hollywood since Dude Ghostbusters dropped in 1984, somehow this particular reboot became the howling battleground for man-babies to scream about ladies ruining their childhoods. There’s even a Lady Slimer!

Although Ghostbusters is not technically a remake, the character bios are awfully similar to those of the original team. Therefore, we can look to other gender-flipped adaptations to see just what it takes to nail the swap.

The 2004 Battlestar Galactica remake perfectly gender-flipped several of its main characters and was significantly better for having done so. The most prominent gender flipped character, Starbuck, ended up being the undeniable highlight, played brilliantly by Katee Sackhoff. Yet the original Starbuck actor, Dirk Benedict, once published a stunningly bitter and egotistical diatribe against the “bleak, miserable… ‘un-imaging’”, the state of the world today, and the female “Stardoe”. His over-the-topness would put today’s anti-PC trolls and Ghostbusters whiners to shame.

Don’t change the character too much

Despite Benedict’s wailing, Sackhoff’s Kara Thrace has a lot in common with his Lieutenant Starbuck. The 1978 Starbuck was a smoking, gambling, ladies man, confident, and the best damn Viper pilot you’d ever seen. Thrace is all of that, minus the man part. Her back story is essentially the same.

A few years ago, Geena Davis suggested every screenwriter go through and change half the character names to women’s names, without changing anything else. Battlestar Galactica doesn’t quite do that, but it made no effort to feminize Starbuck. Kara Thrace is cocky and temperamental; Sackhoff describes her as “a girl who drinks most of her calories.” She also gambles, fights, and puffs that cigar, to Benedict’s utter confusion and despair.

This is not to say that female characters are best when they are written like men, but rather that gender flipping helps creators avoid falling into gender stereotypes.

Another great aspect of Battlestar Galactica is that the other characters don’t make a big deal about her femaleness. So often, “strong female characters” are shown proving their strength to sexist jerks. It might give the viewer a moment of satisfaction, but by not making her waste all her time battling sexism, Starbuck is free to simply be a strong, well-written, evolving character.

We don’t yet know how Ghostbusters fares in this regard, but at least they are still letting women be scientists!

But it’s okay to acknowledge gender

While Battlestar Galactica certainly doesn’t let Starbuck’s gender define her, it also doesn’t ignore it. Some of the major experiences that shape her character are made possible by her femaleness. When the series delves heavily into issues of sex and reproduction, Starbuck is captured by the Cylons and has her ovaries harvested for their experiments. The incident has a profound affect on Starbuck; even though she is not portrayed as maternal or interested in motherhood, she feels the violation of her body deeply, as a woman. Beyond the obvious (extreme) violation of having an organ removed, she has the additional horror of knowing they will be used to propagate Cylon hybrids against her will.

Ghostbusters looks like it will do well in punching down at sexists. We hope the actual story doesn’t involve too much sexism against the ‘busters and, like Battlestar Galactica, leaves them free to just be, and bust ghosts.

Use it to make inter-character relationships more interesting

The other main way in which Battlestar Galactica acknowledges Starbuck’s gender is in her relationships. The original Starbuck was best friends with Lee Adama and had an on-and-off romance with Lee’s sister, Athena. The 2004 series compacts those two relationships into one. She also has a history with Lee’s dead brother, Zak. This complicates the relationship between Lee and Starbuck, and keeps it in flux as the characters each evolve, rather than two standard and static relationships.

Of course, it helps that the romance is never forced, nor is it central to the story. And the gender flip does not happen specifically to manufacture a romance, it just happens to combine two story lines in a way that tightens the narrative.

Let the actor own the role

As terrible as Dirk Benedict’s thoughts on feminism are, he believed passionately in the Starbuck he created. It takes both good writing and good acting to create a truly engaging and memorable character, and Sackhoff is very much part of what makes Starbuck successful. This is especially important with gender flipped characters, as you don’t want the writer to explicitly try to write gender into the character, especially a male character turned female; it will only result in falling back on tired stereotypes. Statistically, the actress is likely to be working with male creators, so her input is vital.

Here lies our best hope that Ghostbusters will be funny. Wiig, Jones, McCarthy, and McKinnon are wonderful comedic actors with distinct style, and Fieg has already directed two of them to great effect in Bridesmaids. As long as they are let loose to really make the characters, everything will be fine. Childhoods still intact.