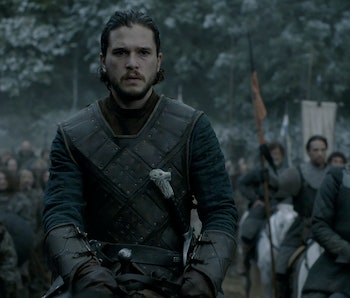 Of the Game of Thrones characters with legitimate claims to the throne, Jon Snow is the guy most people are rooting for. Fans are split on Daenerys — some love her, some are exasperated with her repetitive plot lines — and while Cersei’s coup was glorious, c’mon, who really thinks she should have the Throne long-term? Margarey would have been the best leader of all, but unless Melisandre heads straight for King’s Landing, she’s gone for good.

And so it falls to Jon, then. After the revelation that his parents are Lyanna Stark and Rhaeger Targaryen, he’s now got a legitimate claim to the throne, and he’s a somewhat seasoned ruler with a level head. And as a series-long underdog, we’re naturally inclined to root for him.

The only problem is, he should never be king. Here’s why.

Bad things happen to kings and queens in Westeros

Jon Snow has not had an easy time of it. He’s gone his entire life believing the wrong guy was his dad, most of his family is dead, the woman he loved died in his arms, nobody will believe him that an army of ice-zombies is invading, his own men stabbed him to death, and he recently got trampled in a battle shortly after watching his little brother get murdered. We’ve seen the show step on him both literally and figuratively – for six seasons straight.

The Iron Throne might be a high position, but it generally isn’t kind to its inhabitants in the long term. (It’s a bit like the Defense Against The Dark Arts teacher position). The Mad King went crazy and was then murdered by his own Kingsguard, Robert Baratheon was murdered by his wife, Joffrey was murdered at his own wedding by his grandmother-in-law, and Tommen jumped out of a window (he’s like the Gilderoy Lockart of the bunch). Next season, Cersei will inevitably meet her death at Jaime’s hands. Why, then, would we wish a fate like this upon poor Jon? The dude has been through enough. Let Littlefinger be next — then perhaps Sansa can do the honors of murdering him.

Even if the Iron Throne wasn’t a one-way ticket to sudden death, Jon wouldn’t be a great choice to occupy the seat, anyway. He’s far too decent to survive in King’s Landing, and he’s got terrible PR skills. We saw this in “Hardhome,” when his poor choice of words briefly made an army of angry Wildings believe that he killed Mance Rayder. All he had to say was “Stannis was burning him in a slow and agonizing death so I ended it quickly with an arrow,” but he left out that crucial “burning” part and only included the “arrow” part. Come on, Lord Commander. Similarly, all he had to do was stress to his men that there is a fucking army of ice zombies after them and maybe they wouldn’t have been so quick to Julius Caesar him. Even in the Season 6 finale, the Northern bannermen all rallied around him, but in the lead-up to that moment, he needed a 10 year old child to do his PR for him.

Jon just isn’t Machiavellian enough to preside over Westeros with the skill he needs.

It would counter the show as we know it

Game of Thrones is not a show in which characters get their just rewards. Good guys don’t usually meet good fates, bad guys stick around for far longer than they should, and moral ambiguity reigns supreme. Jon is a hero and an underdog, and to give him good fortune would be decidedly anti-Thrones. As Tyrion once said, if you’re looking for justice, you’ve come to the wrong place. Of course, Season 6 changed that a bit; without George R. R. Martin’s books as direct source material, the writers have shown an inclination towards a more traditional bent with clean cut heroes and villains.

But the Game of Thrones showrunners have still maintained that their ending will be the same as Martin’s even if the way they arrive there is different — and Martin has gone on record saying he looks to Lord of The Rings as his model ending. From that, we can infer that Daenerys is probably in the Aragorn role, as the long-lost ruler ascending the throne. That leaves Jon in the Frodo role. The guy who is crucially important to the story, but after everything he’s been through, too damaged to live a normal life and gets a bittersweet ending.

“Bittersweet end” is a nice way of saying “he fucks off in a boat,” and between Gendry and Brienne and Podrick, Game of Thrones loves giving its characters that kind of ending. It would be a natural fate for Jon.

Jon Snow or Jaehaerys Targaryen or whatever his real name is might be destined to be king. But to fit the show as we know it, his reign should never come to pass.

More like this
Entertainment
7.31.2022 12:00 PM
'House of the Dragon' will obliterate one annoying 'Game of Thrones' rule
By Alex Welch
Entertainment
7.23.2022 8:03 PM
House of the Dragon panel recap: Everything we learned about the Game of Thrones spinoff
By Jake Kleinman
Culture
8.3.2022 9:00 AM
7 amazing sci-fi shows and movies coming to HBO Max in August 2022
By Robin Bea
Share: