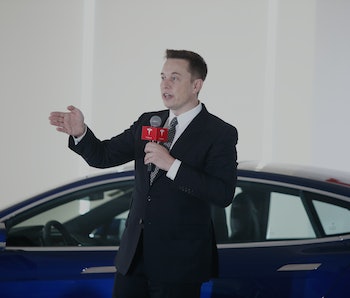 Tesla CEO, billionaire, and potential Bond villain Elon Musk loves Twitter. As such, Musk likes to tweet out his opinions on everything from HBO’s upcoming sci-fi series Westworld to books about the universe and their authors to FPS games like Overwatch.

When he isn’t creating cutting edge technology that could bring about world peace, or theorizing about admittedly crazy things (even when we think he’s wrong), he occasionally offers us plebes a peek into his personal life, like when his future billionaire son asked dear old dad about his favorite animal.

Musk took the chance to answer his son on Twitter, and it should make Douglas Adams fans proud.

According to Musk, his favorite animal is the Ravenous Bugblatter Beast of Traal, a creature found in Adams’s Hitchhiker’s Guide to the Galaxy, which, according to the Hitchhiker wiki, is “a wild animal from the planet of Traal, known for its never-ending hunger and its mind-boggling stupidity.”

Per Adams himself, you can use a trusty towel to “avoid the gaze of the Ravenous Bugblatter Beast of Traal (such a mind-boggingly stupid animal, it assumes that if you can’t see it, it can’t see you).”

So why does a genius who’s basically the modern Henry Ford love a dumb, fictitious creature? That remains unclear.

However, we’re surprised he didn’t choose Adams’s most famous fictitious technological creation: the Babel Fish, the leech-like animal that is inserted into a wearer’s ear and allows that person to instantly understand what’s being said in any language. If only Tesla or one of Musk’s companies could invent that!