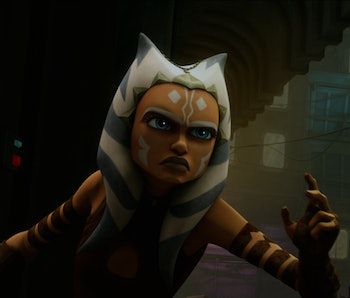 Asking about what is and isn’t part of the Star Wars canon is an easy way to get Star Wars fans sighing or talking in short-clipped sentences, but pretty much everyone agrees that the two cartoon shows, The Clone Wars and Rebels, are totally rad.

Fortunately for both hardcore fans and the corporate empire controlling Star Wars (Disney/Lucasfilm), both Rebels and The Clone Wars also completely count as part of real Star Wars canon. This fact allows for Forest Whitaker to play an older version of Clone Wars character Saw Gerrera in the forthcoming new movie Rogue One. But who else from Rebels or The Clone Wars should show up any of the new films? Here are six cool candidates.

This guy is technically a Clone Trooper, meaning he was a big deal in the Clone Army which fought with the Jedi Knights, but later, mercilessly killed them in Revenge of the Sith. One The Clone Wars Captain Rex was depicted as being super chummy with Anakin, Obi-Wan, and Ahsoka, meaning it was hard to imagine him going through with the genocide-inducing Order 66. And in the most recent season of Rebels, it was revealed he didn’t! Instead he and a few of his fellow clones managed to extract a chip from their brains, and became free agent Clone Troopers. Rex is then depicted to be joining up with the Rebels, acting as a kind of military adviser in their fight against the Empire.

Now, because Rex is a clone from the Star Wars prequel era, that means he’s cloned from Jango Fett, which in turn, means he’s genetically identical to Boba Fett. So, if he were to show up in a new stand-alone film, he’d need to be played by Temuera Morrison, since that’s the canonical Jango Fett, right? Maybe. But what if Captain Rex showed up in one of the sequels to The Force Awakens? That would make the character like almost 90 years old? Could a super old Rex still be helping out? Chilling with the Resistance even?

While Doctor Who fans would probably be more excited about this than Star Wars fans, one has to hope there’s some kind of crossover there, right? On The Clone Wars, super-popular Doctor Who actor David Tennant provided the voice of Professor Huyang, an ancient droid who taught everyone how to build lightsabers. If you’ve never seen The Clone Wars, your eyes are not deceiving you: the guy who played the most popular version of “the Doctor” on Doctor Who is also in charge of giving everyone their lightsabers on Star Wars. This is canon! And though Huyang loses a bunch of his limbs in a few episodes, there’s no reason to believe he couldn’t resurface in a future Star Wars story. Luke was looking for the first Jedi Temple in The Force Awakens, so hopefully Professor Huyang is hanging out there, ready to build a bunch of new lightsabers.

One of the most popular characters from The Clone Wars is unquestionably the pirate leader Hondo Ohnaka. Voiced by Jim Cummings, Hondo had an on-again-off-again relationship with the Jedi, specifically Obi-Wan Kenobi. Like many characters in Star Wars, Hondo is a pirate with a heart of gold, meaning he’s quick to help out, or betray everybody, depending what he thinks is his best bet. An older Hondo recently appeared on Rebels, meaning this guy is still wheeling and dealing throughout the galaxy. Actually, there’s almost every reason to believe Hondo could, conceivably pop in Rogue One, even as a background character.

As part of the crew of The Ghost on Rebels, Sabine is the demolitions expert. Why she’s not already a part of the Rogue One ensemble is a little confusing as she seems perfect for this kind of explosion-heavy mission of mayhem. And, the actress who voices her, Tiya Sircar, seems totally perfect to play her in a live action version, too. Other than blowing things up, Sabines biggest other trademark is adding a flair of graffiti to everything she does. Basically she’s like the Banksy of Star Wars.

Chillingly voiced by Corey Burton, Cad Bane is the only post-Boba Fett bounty hunter introduced into the Star Wars mythos who is actually scarier than Boba Fett. Because Cad Bane belongs to the alien species of the Duros (a few of those guys were hanging out in the Cantina in the original film) we could totally get down with the idea he could have a lifespan longer than that of a human. If Episode VIII is going to have anything in common with The Empire Strikes Back, a cool, badass bounty hunter seems to be the ticket. Sure, Cad Bane would be pretty old, but he’s still one of the slickest, most formidable characters to come out of any of the Star Wars cartoons to date.

This is a no-brainer. Spiritedly voiced by Ashley Eckstein, Ahsoka has been a fan favorite since her first appearance right at the start of The Clone Wars. Since then, Ahsoka’s popularity and relevance has only become more significant, not just for the fandom, but for our understanding of the Star Wars universe as a whole. Ahsoka’s journey is significant for several reasons, but big points are the twin facts that she was once the Jedi apprentice of Anakin Skywalker AND that she left the Jedi Order before they were all murdered. In the very recent season 2 finale of Rebels, Ahsoka squared off with her former master –now Darth Vader – and wounded him to the point of earning a draw in the fight. Vader didn’t kill her. She didn’t kill Vader.

At the end of the episode, we caught a glimpse of Ahsoka walking bravely amid the ruins of a Sith Temple, proving, she is in fact alive! A secret former Jedi with knowledge of the Dark Side and the Light? A significant female character in Star Wars who is adored by the fans? Ahoska Tano is ready for the big screen. If Saw Gerrerra can be in Rogue One, then Ahsoka can basically have her own Star Wars movie, all to herself.