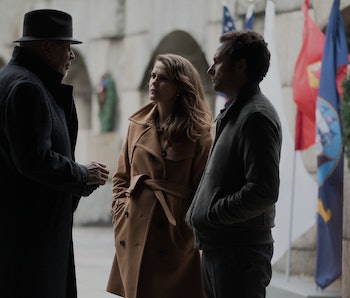 The Americans is good and unique partially because it withholds the expected, and the finale is no exception, though perhaps one might have rather seen a bit more advancement in the plot. Instead, the focus was entirely on the William crisis, and its ambiguous ramifications for the Center’s operations in D.C.

Even if it felt like recycled information, the lonely, unhappy William’s (Dylan Baker) despondent dying speeches to Aderholt (Brandon Dirden) and Stan (Noah Emmerich) at least pointed in an interesting — if slightly infuriating — direction for the FX series’ next, penultimate season. Perhaps our inclination isn’t exactly to want the Jennings’ caught, or forced to flee: A move to Russia seems like a fish-out-of-water change neither the average viewers or Philip and Elizabeth would wan). But a greater sense of stakes and risk would be welcome. Gabriel (Frank Langella), of course, does believe there is risk — too much — and that it’s necessary for himself, as well as the Jennings, to “come home. In his mind, William’s pervasive doubts about the Center’s recent initiative made the prospect seem all too likely that he had given Philip and Elizabeth up.

With the Center urging the Jennings to get out of town, one wonders what they’ll do for work if they choose to stay. When Stan comes home at the end of the finale, and Philip manages to safely extract Paige (Holly Taylor) from her date with Matthew (Danny Flaherty), it becomes clear to the Jennings’s that the FBI has not, as Gabriel feared, been put on their tail. Therefore, given how much despair the idea of forcing their children to live in Russia for the rest of their life seems to cause them, one gets the impression that they won’t move away unless forced to.

And yet William’s comments were still discomfitingly suggestive. Even if he didn’t throw any names around, Stan and Aderholt now know that William’s affiliates are an attractive, young-ish couple with two children. Stan (Noah Emmerich) hasn’t been suspicious of the Jennings’ allegiances since Season 1, at least outwardly, but one worries that the warning signs will stack up quickly. There are just too many possible moving parts — too many roads that could lead back to them.

Philip realizes that Matthew is one of the possible lynchpins for disater. If Paige gets too close to him — and she is as open with him about her parents as Philip and Elizabeth know Matthew is with Paige — then there is the potential for damning information to find its way back to Stan. Philip forbids Paige to pursue the relationship. This is Phase 1 of protective measures to come, no doubt, in Season 5.

It’s always tough, or even impossible, to tell where The Americans will opt to steer things, however. Going into Season 4, the natural expectation, following Paige’s revelation of her parents’ profession, was an operation against Pastor Tim that was wholly avoided. Indeed, the Jennings’ are closer with Tim and Alice than ever before. Though Martha’s end was tragic, she was not killed, or as far we know, even mistreated by Russian forces.

Instead, the crux of the season ended up being something bigger than any individual person: the threat of deadly, inhumane biological weapons. It became the cause that everyone had to come together behind, and the thing for which several characters either sacrificed themselves (William) and put their safety on the line (Oleg). Gaad, no doubt, was a side effect.

In such an uncertain environment, what’s safe to assume is coming?

First, a slow-brewing cold war between the households of Beeman and Jennings. The bread crumbs have to lead somewhere, and with Aderholt — increasingly, an even-more -astute investigator than Stan — on the William case as well, it seems like it would be hard for the Bureau to not come across clues or witnesses leading them back to suspect sketches of Philip and/or Elizabeth.

Perhaps, after some research into the Lassa virus that killed William — where was the vial from he had crushed in his hand? — they will be led to Don at the military base, and then Young-hee. Certainly, these two will be able to, and even happy to, provide information. Martha’s parents — who have seen Clark’s face — may have a role to play, as we feared momentarily when her father popped up for a moment this season.

Another option: Young Henry Jennings (Keidrich Sellati), always only just out-of-earshot of his parents’ revealing conversations with Paige, will hear or see too much at home. It’s been apparent all season, and even at the end of Season 3, that he feels just as or more at home with Stan and Matthew as he does in his own home. Will feeling betrayed by his family send him over the edge, and cause him to spill the beans to the Beemans?

And what if a Henry rival shows up unceremoniously, destroying every illusion Philip and Elizabeth have worked so hard to prop up? The final huge white elephant in the room, of course, is Misha/Philip’s child with Irina, Misha (Jr.), who, as we learn suddenly in the Season 4 finale, is preparing to travel to the United States from Russia to find the father he never knew.

Misha 2 doesn’t realize his dad is much more than a travel agent; perhaps he doesn’t even realize that he has a family. The disaster of him showing up on the Jennings’ doorstep is hard to imagine. One wonders if he would dare to be so bold, or if he has any sense of the risks.

So there are many different areas of possible eruption, which doesn’t bode well for things returning to business-as-usual next season. This won’t be like the middle of Season 4 when Gabriel pared back the Jennings’ operations, and things reset somewhat.

Nonetheless, if Philip and Elizabeth are plunged into dire straits too early on, it’s hard to see how Joseph Weisberg and Joel Fields would fill out the impending 23 episodes (13-episode Season 5 and 10-ep Season 6) they’ve been guaranteed by FX. A final season in Russia would be a dire prospect. No direct answer answers from Weisberg and Fields yet, but we can expect the slow burn to continue, while the Jennings’s potential for vulnerability multiply.