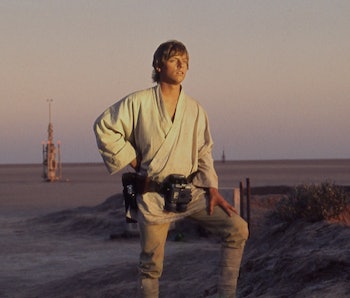 We’re at a crossroads as Star Wars fans. But the worry isn’t about the current number of post-Force Awakens episodes about to round out the new sequel trilogy. It isn’t about the handful of standalone movies coming down the pipe beginning with the possibly-disastrous Rogue One. It isn’t even having to come to the realization that Star Wars hasn’t been a niche thing reserved only for geeks for about a couple of decades now. It’s something much simpler than that. We have to figure out what to call the saga that us fans have come to know and love.

The conundrum is very real for everybody who’s ever tried to talk about Star Wars for the past three decades, though the real problem began to take shape when former saga sage George Lucas decided on a strict naming convention for his prequel trilogy — beginning in 1999. The official title for the first movie in that three-movie arc is the awkwardly complicated Star Wars: Episode I - The Phantom Menace. Subsequent movies also featured the same naming convention: Star Wars: Episode II - Attack of the Clones and Star Wars: Episode III - Revenge of the Sith. It’s all very official, but hopelessly clumsy. Imagine all the hot air you’d waste if you said these titles all the way through every time you mentioned how mediocre they are?

The easy fix is to go with the episodic number or the subtitle. So, “the podrace in Star Wars: Episode I - The Phantom Menace still kind of holds up well” becomes the much easier to say “the podrace in The Phantom Menace still kind of holds up.” You could also just go with, “Man, I hope all the actors bought something expensive with all that money they got to appear in Episode I.” No one ever said the entire thing because, like a lot of Lucass decisions around that time, it was patently ridiculous.

The ingredients for this kind of naming convention can be traced back to the release of The Empire Strikes Back in 1981. The iconic opening crawl of the original sequel was the first to include the title and the roman numeral episode number “V” for Lucas’s planned saga. Episode IV had originally been included on the opening crawl of the 1977 original, but executives at movie studio 20th Century Fox figured if they began their movie touting the fact that it was the supposed fourth chapter of a story the clueless audience would wonder why they didn’t see the first three. Until 1981, Star Wars was just called Star Wars, but once it became a hit and allowed Lucas to develop the sequels to his Saturday morning serial throwback space opera, the first movie was rebranded as Star Wars: Episode IV - A New Hope.

Despite this, depending on the context of saying “Star Wars,” people just knew whether you were talking about the first movie or the saga as a whole. Still, the retroactive name change caused a bit of an uproar in fan circles who felt betrayed — for some reason — that their beloved movie was called something different even though it really wasn’t. Evidence of this can be found in things like the Star Wars version of the popular video series of Honest Trailers, where movies are humorously lampooned for their faults. The video clearly states it’s for Star Wars, meaning the first movie, and not A New Hope. “Star Wars…the first one,” the gravelly voiceover says, “We are not calling it A New Hope.”

The Honest Trailer is a knowing send-up of fan outrage, but also has a ring of truth to it. Some fans take a stand and refuse to call the 1997 original A New Hope. Since the first trilogy and the prequels it’s simply been a very, very nerdy preference. But now that the saga is rapidly expanding, things might need to change.

The modus operandi of the new sequel trilogy under Disney’s watch is to get away from the faults of the prequels however minute they may be, even in the naming conventions. The official title for The Force Awakens isn’t Star Wars: Episode VII - The Force Awakens, it’s Star Wars: The Force Awakens. The episodic number is simply a reference to the whole saga’s sequence — it’s even there to distinguish between movies on the official website — and fans have gladly referred to it by the title just like they’ve referred to The Empire Strikes Back and Return of the Jedi since those releases.

But, in this case, since we’re going to be getting a whole lot more Star Wars movies — including Rogue One, which could complicate things even further —fans should simply adopt the Star Wars moniker to refer to the grand story as a whole rather than the specified 1977 original. In turn, stubborn fans should just eat crow and take to calling the first movie A New Hope since the rest of the films are known as under these individual titles. When you want to refer to a specific moment in the galaxy far, far away, it’s just easier that way.