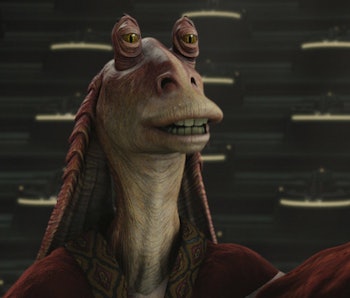 During a conversation between Chris Rock and J.J. Abrams at the Tribeca Film Festival this past weekend, the Star Wars: The Force Awakens director let a tasty morsel of information slip about one of the movie’s most elusive mysteries. The question of new Star Wars lead character Reys parents surfaced even before audiences actually got to see the movie. Theories ran rampant: Is she Luke’s daughter? Obi-Wan or Qui-Gon Jinn’s long lost progeny? Kylo Ren’s secret sis? When simply asked by a fan at the Tribeca Q&A about the identity of Rey’s parents, Abrams offered a patented non-answer.

“Rey’s parents are not in Episode VII, so I can’t possibly, in this moment tell you who they are,” the director teased, “But I will say that it is, this is all I would say — it is something that Rey thinks about, too.” Even after he clarified the statement to EW following the session, saying “What I meant was that she doesn’t discover them in Episode VII, not that they may not already be in her world,” fan fervor grew over whether Abrams meant she she’s not a Skywalker or a Solo, or whether he’s simply playing the old mystery box game again.

In the spirit of crazy Star Wars fan speculation, Pablo Hidalgo, creative executive of the Lucasfilm Story Group, took to Twitter to remind people that weird conjecture has always been a part of the thriving Star Wars community. In honor of Hidalgo and Abrams reminding us all that Star Wars fans are sometimes completely bonkers, here are some of the most absurd Star Wars fan theories out there.

7/. Mace Windu thought he was the chosen one.

The perfect Star Wars fan theory is usually born out of an obsessive love of something that leads someone to forego honest speculation in favor of reading too far into typically baseless hearsay. Case in point: Mace Windu, the Jedi master played by Samuel L. Jackson in the prequels.

In Jackson’s hands, Mace could have been the coolest dude in the galaxy, like a lightsaber-wielding Lando Calrissian, but instead, came off as a whiny old man who pissed off his colleague — bringing some random kid in front of the Jedi council and insisting he’s the one that’s going to bring balance to the Force. Granted, he probably felt some inherent evil coming from Anakin when Qui-Gon showed up with him out of the blue, but what’s the real reason for Windu being such a grouch? One fan theory says he honestly thought he was the chosen one and not Anakin. Windu clearly took it upon himself to try to assassinate Emperor Palpatine in Revenge of the Sith as a way to bring balance to the Force, and even could have convinced Anakin that Palpatine was evil. Instead he got some Force lightning to the face.

One of the most brutal images from the original trilogy was Luke returning to his homestead in A New Hope and seeing the charred remains of his aunt and uncle, a horrifying incident that convinced him to follow Obi-Wan and go on his hero’s journey. It was implied that stormtroopers killed Owen and Beru, but the deaths happen off-screen, so sure enough, there are theories out there that suggest Boba Fett disintegrated the poor innocent relatives who happened to own the droids the Empire was seeking. After all, he’s a stormtrooper clone bounty hunter and is used to doing that sort of thing, with Vader even referencing it in his “no disintegrations line from The Empire Strikes Back.

According to Special Edition canon, Fett was on Tatooine with Jabba the Hutt at the time, and would have been the perfect culprit… except is he really? This theory presupposes that Vader knew where his step-relatives lived, and by association knew where Luke lived too, unless Fett was just hanging out there and got random orders to kill. There’s just enough unknowns for this theory to potentially be true, however unlikely it is.

5. Star Wars doesn’t take place a long time ago in a galaxy far, far away.

Is the opening title card to every Star Wars movie a big fat lie? Yes, the “A long time ago in a galaxy far, far away….” conceit is meant to tie the saga to the Saturday morning serials that influenced George Lucas, but a few hidden extraterrestrials in The Phantom Menace could blow the lid off the galaxy far, far away lie.

During the senate hearing sequence calling for a vote of no confidence for Chancellor Velorum, a smattering of alien races can be seen calling for his dismissal, including a group of aliens that look like E.T., the alien with the glowing finger at the center of director Steven Spielbergs classic film. This could all just be a case of Spielberg and Lucas’s long-running game of nodding to each other’s work in their films… or it could mean that the Star Wars saga takes place someplace near the Milky Way galaxy sometime in the early 1980s.

4. The Lars family is in cahoots with Darth Maul.

In the scene from A New Hope when Luke announces to poor Uncle Owen and Aunt Beru that the droids might be stolen, a familiar looking design can be seen on the ceiling of the homestead. The distinctive black and red outline could just be the latest Tatooine interior decorating craze, or it could be an outline of Darth Maul’s facial tattoos.

Does this mean that the Lars family has been secretly colluding with the Sith the entire time, and agreed to raise the orphaned boy in order to make him learn the ways of the dark side, instead of the light? Is that why Uncle Owen calls Obi-Wan a “crazy old man,” and paid some kind of sick homage to their fallen Sith comrade right under Obi-Wan’s nose? Nah, probably not.

We don’t actually see Naboo in the original trilogy, so naturally it couldn’t exist in the saga’s timeline after the prequels, right? There has to be some sort of story where Naboo is overrun and left to rot after the Empire comes to power, forcing Yoda to relocate to the birthplace of the children he swore to help protect, only the planet is now like an abandoned bog, or a shell of its former self.

The lush, green planet of Padme Amidala has been the subject of a fair share of fan theories that try to explain its fate after the prequel timeline. One particularly absurd theory suggests it actually became the Death Star because of its hollow core. But the best, and weirdest, is the suggestion that the Empire let Naboo die and rename its system, only to have Luke return there to seek training from Yoda in The Empire Strikes Back. It’s why, when he touches down on the planet, the Force sensitive Luke says, “There’s something familiar about this place.

2. Tatooine was the perfect place to hide Luke.

Here was Obi-Wan and Yoda’s bulletproof plan for hiding Luke and Leia: Give the daughter to a prominent anti-Empire dignitary and change her last name, and bring the son back to Anakin’s home planet to his only other living relatives and keep his surname. Yep, no way Luke could have been found that way. It sounds absolutely idiotic, but bringing Luke to live with Uncle Owen and Aunt Beru might have been the perfect place to hide him because Vader would probably never go back there.

He was raised as a slave on the planet, and his mother was so abused that it led him to freak out and slaughter a bunch of Tusken Raider children. The only good memories he must have is winning the podrace and meeting Qui-Gon to get him off that desolate rock. Also, Anakin hates sand.

The most bemoaned element of The Phantom Menace is also the Sith lord who actually orchestrated it all? That fan theory — suggesting that Jar Jar Binks is the true villain of Star Wars — burned up the subreddits late last year, after it was posted by a redditor named Lumpawarroo. The persuasive redditor told us, “I think the idea of somehow ‘justifying’ his character might be appealing to fans for reasons I actually touched upon in the theory submission.” He continued: “Jar Jar has become the poster child that epitomizes the things people perceive as flaws in the prequels. Fix Jar Jar and you necessarily assuage much of the disappointment felt by so many.”