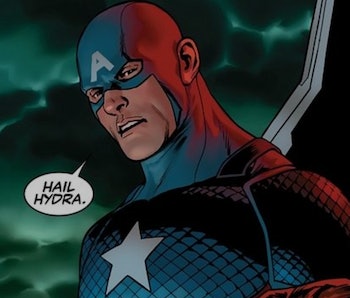 When Captain America announced that he was an agent of Hydra, the internet was rightly upset. What this means that as far as the comics go, Captain America is, and apparently always has been, a member of a fascist regime. The reveal, which critics decried as antithetical to the character, seems on the surface as a very flashy twist meant to grab the fandom’s attention. Safe to say, it worked.

Unfortunately, Hydra has a thematic connection to the real life Nazi regime, and linking Captain America to that true history is not only disturbing, but incredibly shortsighted of Marvel. It’s hard to believe that Captain America could ever be a part of a regime with Nazi ties, especially since the cover of the very first issue of the Captain America comics depicts Cap punching Hitler square in the jaw. Just, getting right up in there with his fist.

Turns out, Hitler has a long history in comic books, and could even be considered the medium’s first supervillain. The real life dictator has been fictionalized in comics as everything from a caricature of himself, to an actual supervillain in some cases. What began as early propaganda, turned into something of a spoof of the man, especially in the post-war period. While these depictions sometimes lacked sensitivity to the many who suffered as a result of the Nazis, others saw a chance to avenge his victims through fiction (think Quentin Tarantino’s Inglorious Basterds).

Before joining the war in 1941, the United States Hitler’s visage was included in the domestic propaganda efforts by Allies. The March 1941 cover of Captain America is possibly the most iconic of the bunch, but many other comics from the 1940s included popular superheroes facing off against the Nazi leader. This included Batman, Superman, Wonder Woman, and many others.

Some of these stories were fairly straightforward, with these heroes joining the Allies in Europe to combat Nazi troops, and eventually taking out Hitler. Others, were quite weird. In Strange Adventures #3, Hitler is captured by aliens right as he is about commit suicide. The aliens leave a fake cadaver, and the aliens punish Hitler by imprisoning him in a space prison as he listens to an endless loop of all his recorded speeches.

In the final issue of DC’s The Unknown Soldier, the eponymous hero who can impersonate anybody using latex masks, kills Hitler, impersonates him to aid the Allies, and stages Hitler’s death as a suicide.

In one of the strangest use of Hitler as a comic book character is when the Fantastic Four faced off against a supervillain named “The Hate-Monger”. Hate-Monger utilized a weapon called the “H-Ray” which turned the members of the Fantastic Four against one another. With the help of Nick Fury, the group defeated Hate-Monger. Reed Richards then unmasked the villain (whose outfit is basically a purple Klans hood with the letter H emblazoned on the forehead). Lo and behold, it was Hitler the whole time! Or at least a Hitler clone made by Nazi scientists.

They faced Hitler again when the Four were transported back in time along with Nick Fury. That time, Fury just went ahead and played out the answer to the question “If you went back in time who would you kill?” He shot Hitler along with the rest of the SS top brass.

Hitler confrontations weren’t just limited to the War/Post-War period. In 1996, a flashback sequence in a Savage Dragon miniseries showed off Hellboy fighting against a mech-armored Hellboy in Romania back in 1952. Hellboy won that match, but Hitler managed to survive. Rather, Hitler’s brain survived. Nazi scientists, as they are, put his brain in the body of a Gorilla for some reason. Hellboy won that rematch, killing Gorilla Hitler off for good.

Perhaps the most lasting comic book impact of Hitler, is actually an indirect one through the origin of Captain America’s nemesis, Red Skull. In the 2012 origin story, Red Skull: Incarnate, it is revealed that as a young man, Hitler personally trained the future Red Skull into becoming his right-hand officer. This origin is significantly different from his film incarnation later.

In 2011 film Captain America: The First Avenger, Hugo Weaving’s Nazi officer became the Red Skull after a negative reaction to the super soldier formula Steve Rogers takes to become Captain America. As the leader of Hyrda, Johann Shmidt decried the Nazis as foolishly racial purity, when instead they should be focusing on acquiring ancient, magical artifacts. Hydra was turned from a Nazi related organization, to a separate fascist terrorist group.

This doesn’t justify Captain America’s recent Hydra reveal, and in many ways makes the entire plot more disturbing. While Hydra began as a fascist group of Japanese nationalists, the organization traded hands between Axis members, and always represented hatred, xenophobia, and genocide. That Captain America is now a part of this organization seems to be a true misunderstanding of the legacy of Hitler, Nazis, and fascists on comic book history.