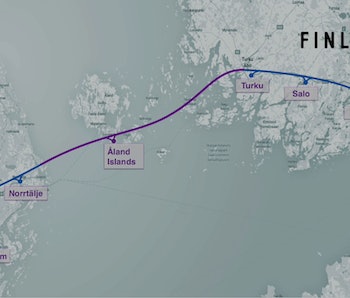 FS Links is partnering with Hyperloop One to create a hyperloop track that will connect from Sweden’s capital of Stockholm to Finland’s capital in Helsinki. The goal for FS Links is to create a Baltic “Super Region” that will seamlessly connect the two Nordic capitals, and the many cities in between them.

Hyperloop One is one of the many companies currently researching Hyperloop technology. The company recently ran the first successful trial on a Hyperloop track in the Nevada desert. While the trial lasted only five seconds, the Hyperloop reached 300 mph (nowhere near the projected 750-mph). Even more impressive is that Hyperloop One succeeded without any help or input from Musk.

Now Hyperloop One is partnering with FS Links to envision this so-called “Super Region” by the European planners. The planned designs seem to indicate that one could reach Helsinki from Stockholm (or vice versa) in about half an hour using the Hyperloop. Hans Mikael Holmström, a partner at FSLinks laid out the mission for the company going forward.

Our goal is to connect Helsinki and Stockholm using Hyperloop technology. We want to merge these two capital cities, and a string of cities in-between them, to create a highly productive, urban area, something we could call a “Super Region”.

Currently, the most exciting prospects for Hyperloop technology is a notional route connecting San Francisco and Los Angeles planned by another Hyperloop company, Hyperloop Transportation Technologies. Hyperloop One is looking into a route between Los Angeles and Las Vegas; and many other European nations have shown interest in connecting cities like Paris and Amsterdam through Hyperloop.

If the FS Links project moves forward successfully, it could be one of the longest Hyperloop tracks to be developed. The proposal has many in the Nordic region excited, including Finland Chamber of Commerce CEO, Risto E. J. Penttilä:

Finland is ready for the Hyperloop, so is Sweden, so is Estonia. Together we can create a golden triangle of fast speed, future oriented transportation that will be the envy of the entire world.

The original concept of the Hyperloop was put forward by Tesla and SpaceX CEO, Elon Musk. The open-sourced concept was soon picked up by a variety of companies founded to explore the Hyperloop concept including Hyperloop One and Hyperloop Transportation Technologies. While Elon Musk and SpaceX have hosted Hyperloop competitions, the company hasn’t directly been involved in the current Hyperloop advances.