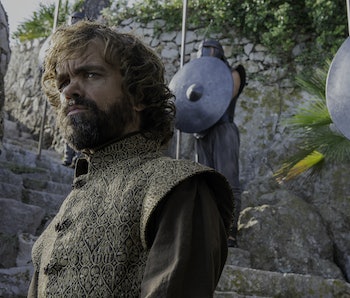 Game of Thrones is the latest pop-culture property to get the Clue treatment from board game developer USAopoly. It’s fundamentally great news for game nerds, though it’s unclear if USAopoly is all that well-acquainted with the series.

The selection of weapons are as follows: Crossbow, Poison Vial, Arakh, Faceless Man, Catspaw Assassin Dagger, Battle Axe. The weapons are great, though obviously the most popular will be the Faceless Man. Who hasn’t wanted to be a faceless man?

The locations, however, make you wonder, do the creators of this game even watch Game of Thrones? There is one set of suspects for The Red Keep (Jamie Lannister, Sansa Stark, Margaery Tyrell, Tyrion Lannister, Cersei Lannister, Petyr Baelish), which is all well and good. But the other set is for Meereen (Daenerys Targaryen, Daario Naharis, Hizdahr Zo Loraq, Jorah Mormont, Grey Worm, Missandei).

Of all the possible locations they could chose — Braavos, the Riverlands, Winterfell, The Wall, even the Iron Islands— they go for the black hole of plot and interest that is Meereen? Hell, even Dorne would have been a better choice, because at least that’s somewhat dynamic in the books.

To put in perspective how mind-boggling this choice is, they leave out Jon Snow, the guy whose face has been everywhere on the internet for the past year; the guy whose hair makes the news. The guy who got out of a speeding ticket because even the cop wanted to know what the deal was with his character.

The guy who even non-fans know died but wasn’t really dead… And instead they opt to include Hizdahr Zo Loraq, the short-lived forgettable character? The guy who only appeared in a handful of episodes whose name makes most actual fans say, “who, now?”

Even so, we can’t lie: Forget Miss Scarlett in the Conservatory with the Candlestick; we’re pumped to find out the culprit is Petyr Baelish in the Red Keep using a Faceless Man.

More like this
Entertainment
7.31.2022 12:00 PM
'House of the Dragon' will obliterate one annoying 'Game of Thrones' rule
By Alex Welch
Entertainment
7.23.2022 8:03 PM
House of the Dragon panel recap: Everything we learned about the Game of Thrones spinoff
By Jake Kleinman
Culture
8.3.2022 9:00 AM
7 amazing sci-fi shows and movies coming to HBO Max in August 2022
By Robin Bea
Share: