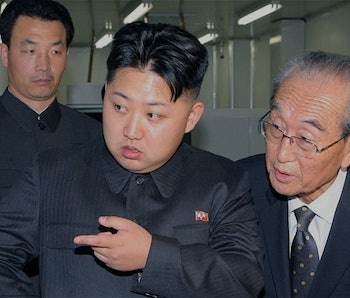 North Korea’s young leader has faced a number of challenges in his early years in charge of the secluded state: Enemies from within, rocket failures, and even the censure of its closest ally, China, as well as the rest of the world over its testing of a nuclear bomb. But all of that has just been prologue for Kim Jong-Un, the 33-year-old leader of North Korea, who is hoping to cement his hold on power this weekend, as he convenes the first Congress since his father Kim Jong-Il was anointed his own father’s successor in 1980.

The massive meeting of state officials from around the country arrives at a portentous time for the North Korean leadership. While few details exist of the internal struggles plaguing the Kim administration, the young leader did order his own uncle executed “for acts of treachery” in 2013. So observers expect that the unusual Congress will provide a unique opportunity to witness how well Kim has since unified state power. It will also offer a window into recent seismic changes in North Korean society.

Foreigners in North Korea over the past year have observed an important change in the nation that may be ratified or condemned at this week’s Congress. Small, informal street markets have popped up all throughout the capital Pyongyang, with the apparent tacit consent of the local police forces. For a nation that once condemned buying and selling of any kind, the current “mini boom” reflects either a liberalization of current in the regime or the presence of a powerful force of dissent.

What’s Going to Happen at the Meeting:

Analysts expect Kim to prioritize getting his joint economic and military agenda ratified by the state administration writ large. Called “byongjin,” it refers to the simultaneous development of the economy and nuclear weapons. But like in most things, the devil may lie in the details, as observers are looking to spot any hint of economic liberalization or military agitation.

What About Nuclear Testing?

North Korea most recently tested a hydrogen bomb in January of this year. The event was not only condemned widely, even by North Korea’s longtime ally China, but senior U.S. officials even questioned whether the bomb went nuclear at all. The embarrassing atomic mishap has led Kim to redouble the nation’s efforts to produce nuclear weapons, including developing the capabilities to attach atomic bombs to missiles. The missile program, however, is languishing.

Delegates from China were not invited to the meeting, surprising some who took the snub as a declaration of the young leader’s independence. On hand though will be at least 100 journalists from foreign media outlets, but at the start of the Congress, far from being in a position to observe the proceedings, North Korean authorities were escorting the scribes around a local factory.

Fans of North Korean pageantry will no doubt enjoy the Congress as even the journalists in the country have noticed authorities trying to spiff up the capital for all the important guests, laying down flowers across the city. The government even banned weddings in Pyongyang “for security purposes” while the congress is in session.

With all the eccentricities and foreboding of any major North Korean governmental gathering, the Congress will likely reveal only a tiny fraction of what occurs behind closed doors. Don’t expect thunderous speeches of fiery dissent broadcast on state media. It’s the gentle winds of change that float out from the meetings that signal a tornado may be brewing.