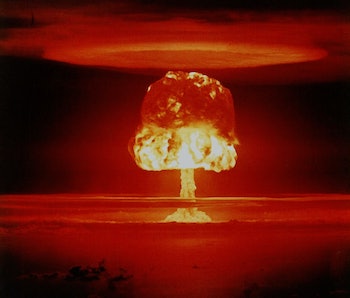 North Korea conducted its fourth nuclear weapons test on January 6, positing some international alarm after the country’s leadership declared it had detonated a hydrogen bomb — a device capable of wreaking havoc far greater than anything unleashed in modern warfare.

The blaring rumble generated by the blast was captured by Zhigang Peng, a Georgia Tech University researcher based in China.

Peng has been recording the seismic signals of every North Korean nuclear weapons test since 2006, and recently sped up their frequencies to enliven the otherwise indecipherable tumults.

Over the nine-second video, you can hear four booms that are a bit chilling:

Seismic signals are the byproduct of either a cataclysmic explosion or an earthquake, and scientists monitor them to track their geographical origins.

They are especially useful for countries which share borders with secretive, propaganda-states that like to showcase weaponry for sport.

Peng said in a statement that “signals from the North Korean explosion were detected about 100 miles from the border at a seismological station in Mudanjiang, China,” and that speeding up their frequency allows the sound to travel “within the range that humans can hear.”

Peng notes that his experiment can’t deduce whether or not an actual hydrogen bomb was deployed during the weapons test, but that fears should be somewhat allayed by his findings, saying that “[last] week’s seismic events are actually slightly smaller” than the last time North Korea tested nuclear weapons in 2013.

South Korean intelligence officials have also dismissed the severity of this latest test, noting that the blast generated last Wednesday pales in comparison to some of the most deadly in history, even if it did generate a 5.1 magnitude earthquake near the detonation site.

More like this
Entertainment
8 hours ago
The stars of 'Men' unpack its mysterious ancient symbolism
By Jenni Miller
Entertainment
5.16.2022 12:00 PM
29 years ago, Marvel unleashed Spider-Man’s scariest enemy ever
By Richard Newby
Science
5.15.2022 7:00 PM
200 years ago, this terror of the Amazon inspired the world’s first batteries
By Timothy J. Jorgensen and The Conversation
Related Tags
Share: