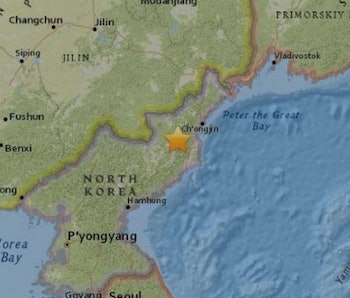 UPDATE: Media sources are reporting that the Democratic People’s Republic of Korea has declared it has successfully tested a hydrogen bomb.

The following is the original article published concerning the tremor caused by the explosion.

A seismic event registering a magnitude 5.1 was recorded in northeast North Korea on Tuesday, according to the U.S. Geological Survey.

Occurring approximately 12 miles to the east-northeast of the city Sungjibaegam, several media sources are reporting that China and South Korea have both determined the tremor to be manmade, indicating what could be a nuclear test.

The Yonhap News Agency has stated that North Korea will make a statement addressing the situation at 10:30 p.m. EST.