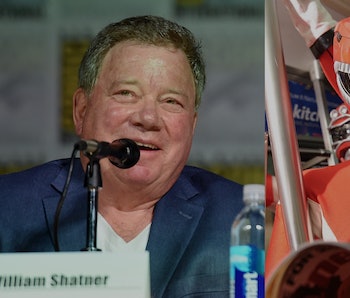 It’s been a very weird week. Prince is gone and people are actually trying to stop human beings from using public restrooms. Much of recent culture news has been maddening, but perhaps one thought can ease our stress: There are quite a few people who think William Shatner should be in the upcoming Power Rangers movie, including William Shatner himself.

In case you weren’t aware, Lionsgate and Saban are producing a big-budget Power Rangers film for a March 23, 2017 release. It doesn’t star anyone really famous except The Hunger Games and 30 Rock star Elizabeth Banks, who will play the evil Rita Repulsa. After the internet got a first look at Banks as the villainous space witch, some people — I don’t know who, but you know, people — turned to Star Trek alum William Shatner and proposed he should be involved in the film, too.

Shatner’s push for a Power Rangers role started out innocently enough, with Shatner just tweeting out the original People link with a fun caption: “I wanna be your minion!” followed by some emojis. Because he’s Shatner and he does what he wants.

I’m sure everyone in the world wants to be Banks’s minion, but the internet saw this and it BLEW UP. First, people tweeted out ideas who Shatner should play, mainly as the wise sage Zordon, the blue head in a giant tube who mentors the Power Rangers. (Side note: Zordon recruited teenagers to risk their lives on the daily. He was a pretty bad mentor.)

“Already played a big giant head” is by far the best thing Shatner has said all year, but it didn’t end there. While Shatner live-tweets TV shows regularly, we sincerely doubt he actually watches Power Rangers. But, the OG Captain Kirk started tweeting ridiculously accurate trivia that would get him nerd cred at Comic-Con. Not that he needs any more.

The official Power Rangers Twitter got wind of the geek icon’s obsession, and Shatner responded in kind, and wait, a minute, he knows about the Blade Blasters formation?!

We don’t care if Shatner has a social media intern tweeting for him — someone who would be in their 20s and realistically know some of this stuff — we want to believe it’s Shatner.

And yeah, it still doesn’t stop there. Shatner changed his Twitter avatar to a power morphing Captain Kirk…

Okay, fine, so he’s having fun on Twitter. Big whoop. Except, a quick search discovers that people have been wanting Shatner to be in a Power Rangers movie long before one was even announced.

Shatner hasn’t made any official statements beyond sly, friendly tweets, but honestly, he’d be perfect for a campy, action-packed Power Rangers film. The franchise is goofy and silly, but earnest, and Shatner is just so on brand with the whole concept: a treasure from the age of classic, campy sci-fi. Why shouldn’t Captain Kirk mentor a ragtag, multi-ethnic group of boundless youths with access to futuristic technologies like teleportation? I think Shatner already knows a thing or two about that already.