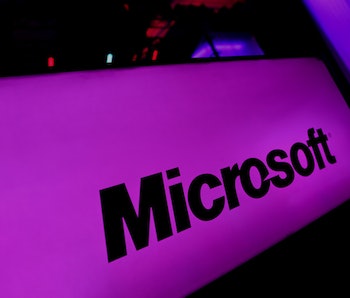 On Thursday, Microsoft sued the Department of Justice for constitutional violations. The government, Microsoft argues, snoops around in customer data and orders Microsoft to remain silent. It’s not the first time that Microsoft has sued the government, but it is a case with major implications on how protected your digital civil liberties are in the future.

This lawsuit comes on the heels of the Apple case, in which Tim Cook and Apple stood up to the FBI. As in the Apple case, this suit goes to show that in the cloud-computing age “we need to be able to rely upon digital intermediaries in order to protect our civil liberties,” Washington University law professor Neil M. Richards tells Inverse.

Electronic Frontier Foundation Senior Staff Attorney Adam Schwartz agrees: “In both the Apple case and the Microsoft case, a corporation is standing up for the privacy of its customers and the rule of law. EFF applauds both companies for doing so.”

“It’s highly likely that the court’s going to take these claims seriously, and I think there’s a high probability that Microsoft will win and that the statute will be declared unconstitutional.”

Apple, perhaps understandably, elected not to sue the government. Microsoft is in a better position. Its lawsuit alleges that a certain, recurring government action violates the First and Fourth Amendments. The government, Microsoft says, compels Microsoft to give up its customers’ cloud-based data. As if that weren’t enough, the government then puts a gag order on Microsoft. As in: That customer, the one whose data we just trawled? Yeah, under no circumstances may you tell her that we did so.

And the government does so thousands of times a year.

To do so, the government relies on the 30-year-old Electronic Privacy and Communications Act. The ECPA predates widespread cloud storage usage by two decades. The relevant statute, §2705(b), dictates that “when the government seizes our private digital information from a cloud provider, the government can get a court order that forbids the provider from notifying the customer.” So says Schwartz, who explains further: “It can do so whenever it has ‘reason to believe’ (a very low standard) that notification would harm a government interest. And these gag orders can go on forever. According to Microsoft’s lawsuit, in the last 18 months, it has received 5,624 federal demands for customer data, of which 2,576 had a gag order, and 1,752 had a gag order with no time limit.”

The argument in Microsoft’s lawsuit is multifaceted, but its claims “are very strong,” Schwartz says. On the one hand, Microsoft is arguing that its own First Amendment rights are being violated.

Assistant Professor of Law at University of Washington Ryan Calo tells Inverse: “Not only do I think that their concerns are legitimate, I also think the argument is strong from a constitutional law perspective.” It’s by-the-book speech restraint: You may not speak about this thing, the government repeatedly tells Microsoft. (And in this case — though it would be unconstitutional regardless — thing means invasion of privacy — or Fourth Amendment violation.) “Maybe there are sometimes good reasons for that,” Calo says, “but it’s an area of the law where we want to closely scrutinize government action.”

Schwartz shared Calo’s belief: “This statute [§2705(b)] violates the First Amendment. Microsoft wants to share accurate and relevant information with its customers (that government seized their data). The gag orders are ‘prior restraints,’ which can rarely satisfy the First Amendment.”

Here’s the amendment, for reference:

The right of the people to be secure in their persons, houses, papers, and effects, against unreasonable searches and seizures, shall not be violated, and no Warrants shall issue, but upon probable cause, supported by Oath or affirmation, and particularly describing the place to be searched, and the persons or things to be seized.

This has traditionally been a personal right, to be enforced by the affected person. It’s clear that the government has infringed upon Microsoft’s customers’ Fourth Amendment rights. What complicates the infringement is that these people, by the virtue (or vice) of ECPA, remain in the dark about this fact.

If I’m one such customer, Microsoft cannot come tell me, “Hey, Joe — we thought you might want to know that the government, at this moment, is violating your Fourth Amendment rights.”

Calo, though, thinks that may be changing. “There’s an increasing realization among courts that companies — including the hotels in the Patel case before the Supreme Court — are able to vindicate the privacy rights of their consumers against the government.”

“We should not lose our right to notice of seizure of our records, just because we have chosen to take advantage of new and convenient cloud storage technology.”

“Not that long ago,” Schwartz — on the EFF’s behalf — explains, “we stored our records in paper in our homes and offices, and government had to notify us when it seized these papers from us. Then we could go to court and demand the return of our papers. Now government is going around our backs to cloud providers, seizing our information, and gagging the providers from telling us. We should not lose our right to notice of seizure of our records, just because we have chosen to take advantage of new and convenient cloud storage technology.”

As for the outcome of this case, Calo, Schwartz, and Richards are cautiously optimistic. Calo says that he’s “finally hopeful” that ECPA may be at last updated. (“Even the people who wrote ECPA say it’s outdated,” he says.) Schwartz says that the EFF “hopes that the federal court will rule in favor of Microsoft, and issue a declaratory judgment that the statute at issue violates the Constitution.”

And we’ll let Richards take us away:

“What we ultimately need to see is that the civil liberties protections that we fought so hard to win in the physical world get translated, meaningfully, to the digital world,” he says. “That’s not that difficult of a thing to achieve. I think that cases like this, cases like the Apple case, cases like the one that Microsoft brought against the Department of Justice for the Irish warrant are all a part of this trend, and I’m hopeful we will get there. And that we will effectually translate our hard-won physical-world civil liberties into the digital space.”