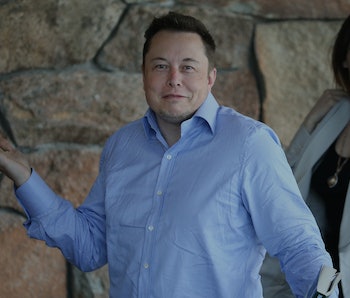 Say what you will about Elon Musk: he may be some kind of maniacal super-villan determined to nuke Mars and blanket the Earth in satellites, but the man clearly loves a dumb joke as much as the rest of us.

On April 3, Musk held an impromptu Twitter AMA session about the upcoming Tesla Model 3, which he promised would have great traction on ice and … cowbells?

“Model 3 will be RWD, with dual motor AWD optional. Even RWD will have great traction on ice due to fast torque response of Tesla drivetrain,” Musk tweeted, before following with this cryptic note: “And, of course, it will have more cowbells.”

Well, now we know what he meant. Earlier today, he tipped Tesla drivers off to a little secret in the latest update. Tapping the autopilot fuction four times in quick succession launches a hidden “more cowbell” feature, where the dashboard display changes to a psychedelically-flashing rainbow road and the famed tonk tonk tonk of Blue Oyster Cult’s “Don’t Fear the Reaper” fills the car. Shortly after the tweet, a Tesla driver got the whole thing on video, and, well, see for yourself. This is an actual feature that an actual car manufacturer spent time and money on to program into its vehicle.

If you don’t get the cowbell reference, I’m sorry, you’re sixteen years behind in pop cultural consciousness, but you can get caught up right here.

If you don’t own a Tesla, I recommend watching the above video, then just putting on the original song while watching this SNES Mario Kart video — it’s pretty much the same thing.