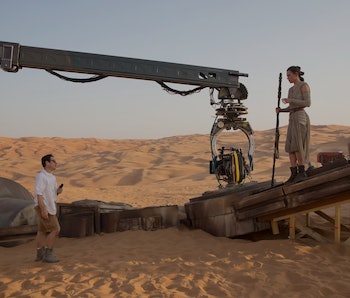 Star Wars: The Force Awakens marketed its heavy reliance on “practical” — read: physically done — effects, but the truth is, the film was also loaded with cutting edge special effects made on computers. From the Millennium Falcon and Jakku to Maz, BB-8 and the Rey/Ren lightsaber battle, the effects team at ILM behind Episode VII had their hands full building the world(s) of Star Wars. Lucky for us, that means a whole lot of deliciously in-depth breakdowns.

We’ve rounded up some of the best of those videos, starting with the most recent, from Art of Film, which gives us a look at building the escape from Jakku.

In this installment of Design FX from WIRED, Mike Seymour discusses the work that went into the environments, action sequences and characters. Here he discusses face capture, eye-scanning and the Medusa system — a performance capture technology used by Disney.

This is a long one. The entire video is just over 48 minutes, but the first 26 minutes are TFA-centric and gives us a pretty comprehensive look at the visual effects in Star Wars.

While most of the VFX breakdowns are in the 5-10 minute range and focus on specific shots and scenes, this episode takes the time to delve into a number of the complex set pieces of the film, complete with commentary from the ILM effects team. There’s talk of Maz and BB-8 and giving the actors the tools they needed to give sincere performances to characters who weren’t in the physical space, along with dialing in the “grey value” of the Millennium Falcon.

This short featurette takes us behind the practical effects used to bring BB-8 to life. While BB-8’s creation wasn’t nearly as VFX-heavy as, say, putting the Millennium Falcon on a sand dune, making him a part of the story and living part of the environment was no small feat. The actors of the film discuss his role and what it was like to work with him.

There’s some overlap here with a few of the other VFX breakdowns, but this one’s in a conveniently digestible bite-sized portion. Check out Jakku, the Millennium Falcon, the Starkiller Base and more.

Even with a respectable number of deep-dives and breakdowns and special features, there’s still a lot of magic and mystery behind the work of ILM and world of The Force Awakens that we’ve yet to uncover.

Much like the Star Wars films before it, we’re likely to continue learning about the hows and why’s of production on The Force Awakens for years to come.