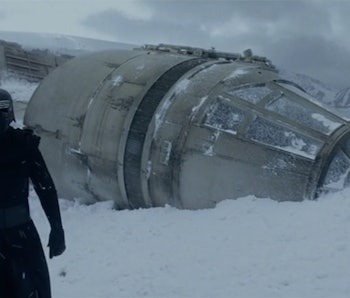 No matter how many times you saw Star Wars: The Force Awakens in theaters, the experience was an incomplete one; true fans know that you have to watch all of the special features and deleted scenes, too. On Tuesday, fans were finally able to get their hands on a physical copy of the Blu-ray, which contains all of the goodies.

We’ve already broke down all of the awesome new tidbits of behind-the-scenes information from the feature-length documentary, Secrets of The Force Awakens: A Cinematic Journey, which premiered at this year’s SXSW, but there are plenty of other special features that map the making of the newest chapter in the Star Wars saga. Here’s what we learned from watching them.

1. Lor San Tekka might not be all that important.

We surmised that Max von Sydow’s character, Lor San Tekka, might be way more important than the movie implied. You don’t cast one of the most accomplished actors in the world in your movie and then kill his character after five minutes, right? Well, maybe not. A deleted scene called “Jakku Message” on the Blu-ray features a Resistance aid informing General Leia that the map to Luke has gone missing and Poe Dameron has been shot down, and possibly dead. But there’s no mention of Lor San Tekka, and Leia doesn’t seem too bothered by his death. Maybe he isn’t related to Rey, or why she’s abandoned on Jakku by her parents after all?

2. Kylo Ren might be weaker with the Force than we realized.

Another deleted scene, titled “Kylo Searches the Falcon” is a nice little contrast to Han Solo’s homecoming on the fastest ship in the galaxy. Taking place after Han, Chewie, and Finn crash-land the Falcon on Starkiller Base, the clip shows Kylo searching the wreckage and sensing his father with the simple “Han Solo…” line revelation. It hints that Kylo might not be as powerful with the Force as we realized, since it took him actually searching Han Solo’s ship to realize his dad is on the battle station planet. The final cut of the movie made it seem like he’s more powerful, as knows Han Solo is on Starkiller Base because he just senses his presence.

The feature length documentary on the disc, Secrets of The Force Awakens: A Cinematic Journey has a great behind-the-scenes look at the infamous first table read, but the Blu-ray special features also take a deeper look with the featurette called The Story Awakens: The Table Read. We learn that the table read wasn’t just for that now-iconic photo, and was actually the first time the cast had read the entire script with actor Mark Hamill narrating the stage directions. Daisy Ridley admitted she bombed during the session because she was so nervous.

4. There are way more practical effects in the movie than you realize.

Possibly the best featurette on the Blu-ray besides Secrets of the Force Awakens is Crafting Creatures, which follows Creature & Drod FX Creative Supervisor (possibly the best job title ever) Neal Scanlan showing viewers how they achieved the level of practical effects desired by director J.J. Abrams. There are at least 105 practical creatures in Maz’s castle alone, while even background characters like Resistance pilot Ello Asty being created via animatronic practical effects as well.

There was room for old names like Harrison Ford, Carrie Fisher, Peter Mayhew, Mark Hamill, Anthony Daniels, and more in The Force Awakens because the story required their character to be there. But what about Star Wars vets who didn’t see a spot for their old roles in the new movie? It didn’t matter, Abrams just found other places for them. For example, Warwick Davis, who famously played Wicket the Ewok in Return of the Jedi, played Wollivan, the anteater-esque alien in the scene in Maz’s castle.

Poe’s droid companion, who eventually meets up with Rey and who holds the key to finding Luke Skywalker, started out as a floating droid originally expected to be a CGI creation. But director J.J. Abrams suggested the droid be practical just like R2-D2, and drew a design on a Post-It note of two circles on top of one another that he envisioned as BB-8 that he called “a snowman with no body.” The Post-It was given to the art department, which came up with designs that led to the BB-8 droid in the final film.

7. One of the earliest ideas for the movie was the forest lightsaber fight.

One of Abrams and co.’s earliest ideas for what would become The Force Awakens was to have a lightsaber fight at night, in the snow. The idea eventually spawned the climactic duels between Kylo Ren and Finn and Rey on Starkiller Base. The scene was created entirely on a soundstage, and the production used real trees, a 360-degree hand-painted forest backdrop, and 750 boxes of fake snow to create the illusion of being outdoors. Abrams actually mistook set logistics photos for a practical location from senior art director Al Bullock and gave the go-ahead to shoot on a set, because he was fooled by how realistic the set would eventually look.

8. J.J. Abrams included a sly nod to Raiders of the Lost Ark.

Han Solo’s freighter is hauling Rathtars, which in the movie escapes, and makes for one of the most Abrams-esque scenes in The Force Awakens. But the scene isn’t all Abrams. The director made sure his monsters had gross tentacles and razor sharp teeth to make them threatening, but as a tip of the hat to Harrison Ford’s iconic role as Indiana Jones, Abrams asked ILM’s CGI special effects artists to make them roll as an homage to the iconic boulder sequence from Raiders of the Lost Ark.

9. The Falcon in The Force Awakens is the same from 1977, only digital.

According to ILM: The Visual Magic of The Force, the special effects house says the digital Millennium Falcon in The Force Awakens is the closest any of the movies has ever come in recreating the original five-foot model created in 1976 for the original movie. The team of visual effects artists scanned photographs from the Lucasfilm archive and the actual model itself to painstakingly recreate every nook and cranny on the updated digital Falcon. Even decals and all the little stickers added by model-makers in 1976 that won’t even end up on-screen were recreated digitally.

The Force Awakens marks the seventh time composer John Williams has composed the music for a Star Wars movie, and the maestro began writing the new music from the day the newest movie was announced. The series has always been awash in playful musical motifs and themes, and The Force Awakens is no different. In the featurette John Williams: The Seventh Symphony, Williams explained that some of the music in the first half of the final cue, titled “The Jedi Steps,” has nothing specifically in common with any of the other themes, and could potentially lead into musical motifs for Episode VIII and Episode IX.