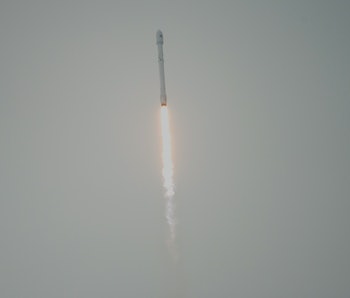 SpaceX accomplished two massive firsts this week when its Falcon 9 rocket launched the Dragon Spacecraft up to the International Space Station. It’s an especially big deal for SpaceX as the company’s primary competitor in the reusable rocket/space tourism race, Blue Origin, has been making strides of its own.

SpaceX has had a ton of historic firsts since since CEO Elon Musk launched the company in 2002. To celebrate, here’s a look at the bigger ones, starting with this week’s victories for the Falcon 9:

Have you watched this video? You have got to watch this video. This is so cool I don’t even know what to say other than: you have got to watch this video. This is the first stage portion of a reusable rocket landing vertically on a tiny drone barge in the middle of the sea (Cape Canaveral in Florida, really, but who cares). This is the first water landing of its kind. (SpaceX made one previous successful landing on solid ground, in addition to some failed attempts by both land and sea.) Also, the barge on which Falcon 9 landed, “Of Course I Still Love You,” is a nod to sci-fi novel The Player of Games, and the Falcon 9 itself is named after the Star Wars Millenium Falcon, so good luck not being a big puddle of emotions by the end of this video.

First landing of an inflatable room on the International Space Station

This is the part of the rocket that did not land on the barge, but continued up to bring supplies to the ISS. Introducing the words “inflatable room” to the context of a zero-G ISS, of course, makes me think of a big ol’ bounce house, but it’s more like a balloon. In addition to the rest of the 3.5 tons of cargo the Dragon delivered to the ISS, this inflatable room – the Bigelow Expandable Activity Module – will be operational at the end of May and remain for two years. The space hotel, of sorts, will allow astronauts aboard the ISS to test material durability and radiation protection. They’ll also enter the room itself periodically – it measures around 10.5 x 13 feet when expanded.

In December 2015, after breaking our hearts many times, SpaceX brought a rocket back to earth in its first successful upright landing.

In 2014, Falcon 9 performed its first flight with landing legs and first successful ocean splashdown. This involved part of the rocket making a soft landing (“splashdown”) in the Atlantic Ocean. The rest of Falcon 9, however, was built for one-time use only.

This was back in 2010. Like the most recent launch, it was also designed to send the Dragon Spacecraft and its cargo up to the ISS.