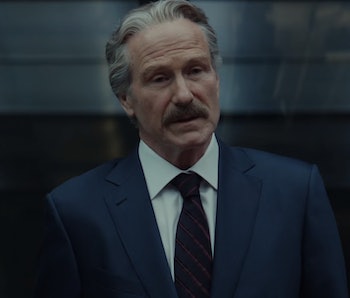 Captain America: Civil War directors, Joe and Anthony Russo, have already confirmed that their upcoming film will feature an unprecedented 67 Marvel characters. One of the surprise additions is the return of General Thaddeus “Thunderbolt” Ross, last seen in 2008’s The Incredible Hulk. Even more exciting is actor William Hurt’s reprisal of his 2008 role in the upcoming Civil War.

Aside from reintroducing the solo Hulk film into the main fold of the Marvel Cinematic Universe, bringing back Thunderbolt Ross could mean big things for Mark Ruffalo’s Hulk in future films. After all, why re-introduce such an important character from the Hulk’s backstory, into a film already brimming with characters?

Introduced in the The Incredible Hulk #1 in May 1962, General Ross was created by Stan Lee and Jack Kirby as Bruce Banner’s archenemy. Not only is he the principal foe of the Hulk, but Banner’s romantic interest in Ross’s daughter, scientist Betty Ross, further fueled his hatred of both variations on the man-turned-monster.

It wasn’t until 2008, in Hulk vol. 2 #1, that writers Jeph Loeb and Ed McGuiness introduced Ross’ own monstrous alter-ego, Red Hulk. Originally his identity as Ross was kept a secret. Red Hulk is more violent than Hulk, and yet is still intelligent in his transformed state. After decades of fighting the Hulk as a man, Ross underwent one of the many super-soldier serum trials that occur in the Marvel universe to become the Red Hulk.

William Hurt’s portrayal of the character in the 2008 film followed a similar arc to his comic counterpart. In that film, Ross worked with Bruce Banner (played then by Edward Norton) to produce a gamma-based super-soldier serum. When the experiment went awry, Ross made it his mission to hunt down the Hulk. Along the way, we watched Ross recruit the talents of a United Kingdom’s Royal Marine named Emil Blonsky (Tim Roth) who, over the course of the film, become a monstrous fighter named Abomination.

Hurt is actually the second actor to portray Ross on the big screen, the first being Sam Elliot in the 2003 Ang Lee film.

In the trailers for Civil War ,we get a different glimpse of Ross than the military man last seen in 2008. Here, he presents Captain America, Black Widow, Falcon, and the Scarlette Witch with videos of chaos, left in the wake of the many battles fought by the Avengers. The presentation shows scenes of the battles from the first Avengers film, Captain America: The Winter Soldier, and Avengers: Age of Ultron, along with the number of civilian casualties from each battle. It’s interesting to note that Ross isn’t wearing his military uniform here, and is instead, dressed in a more bureaucratic attire. He explains to Steve Rogers that “people are afraid” before Tony Stark enters the scene to establish the main confrontation for the film.

Ross’s appearance in Civil War, in particular, raises big questions for his enemy, the Hulk. Many fans are hoping that his return means Ross will, in fact, become the Red Hulk and eventually fight Banner in a solo-Hulk film. Whether Mark Ruffalo’s will appear in Civil War is still a huge maybe; his next confirmed appearance as Hulk was revealed, surprisingly, to be in the upcoming Thor film, Thor: Ragnarok.

This could mean the start of many exciting things for the Hulk in the MCU, all beginning with the return of Thunderbolt Ross. For starters, many fans are taking the fact that Hulk will be in the new Thor movie as a sign it will be an adaptation of the popular comic arc, Planet Hulk, where Banner is deemed too destructive for Earth and gets sent to outer space. Perhaps Ross’s new role as a sort of Avengers-watchdog in Civil War will help facilitate Hulk’s extra-planetary travels?

Obviously, we won’t know Ross’s full capacity until the film releases next month, on May 6. Whether he will truly embody the character of Thunderbolt Ross and become the Red Hulk, or become a re-tooling of the character in order to serve a larger narrative function in the film is still up in the air. It might be messy to bring in a fully-fledged Red Hulk when a Hulk solo movie is still yet to be confirmed, and so many characters are set to appear in Civil War as is.

Equally unknown is the fate of Liv Tyler’s portrayal of Betty Ross and whether she will return, given the attempted romantic relationship between Black Widow and Bruce Banner. All we know is that regardless of what happens, the shadow of the Hulk will loom large across Civil War.