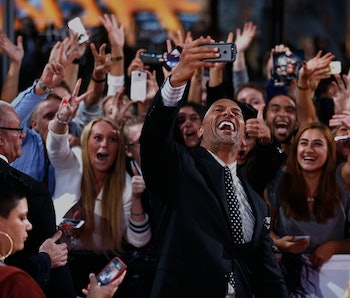 Any effort to understand celebrity worship must begin with a hard look at fandom itself. The word fan comes from the Latin word fanaticus which means “insanely but divinely inspired.” This is apt. Meeting Dwayne Johnson (and other celebrities) makes people go insane. It has — for a number of scientific reasons — always been thus.

Psychologists have a three stage scale to describe how someone reacts to a celebrity. The first stage is “low worship” — you enjoy watching and reading about them, but you’re not going to want to sniff their underwear. The next stage has a “broader social character,” which means personal enthusiasm deepens due to collective interest. The last stage is “high celebrity worship” and describes people who over-identify with a celebrity. This is the stage of obsession.

This obsession describes a parasocial relationship, a liaison driven by a deep addictive component. University of Leicester researchers argue in Personality and Individual Differences that this level of celebrity worship causes people to believe their private relationship has another side. The people who are more likely to seek out this relationship tend to have a “thin” boundary structure, meaning they are open to experience, but don’t have a great sense of interpersonal boundaries.

It’s only recently that researchers have begun to study, and agree, that an addiction to a celebrity is just as real as an addiction to drugs or alcohol. And because of this, it’s fair to say that the process of addiction is likely the same. Addiction begins as a recognition of pleasure and ends as a drive toward compulsive behavior. Pleasure is felt when the cluster of nerve cells in the cerebral cortex release dopamine and because dopamine not only creates pleasure but also triggers memory formation, this creates the basis for the development of an addiction. The brain registers all pleasures, and addictions, in the same way — so if you’re a level three celebrity worshipper, being in contact with that celebrity is going to give you a very real, and very addictive, high.

That’s not to say that only the most pathologically obsessive fans freak out when they see their celebrity of choice. The majority of people feel a thrill if they recognize someone passing by; some of this is because celebrities can be avatars for social status. Being in contact with them, no matter how briefly, comes with social capital. This is why people will tell you they saw a celebrity even if it is a celebrity neither they nor you particularly care about. There’s also this: Being surprised, research shows, makes us happy.

In a 2001 study, Emory University’s Functional Neuroimaging Group measured changes in people’s brain activity via functional magnetic resonance imaging. They blindfolded subjects and squirted either juice or water in their mouths — sometimes in a pattern and other times unpredictably. The researchers found that neural pathways reacted more strongly to the unexpected stimuli, regardless of whether the person liked juice or water more. They realized that when an unexpected stimuli is experienced, the brain’s nucleus accumbens reacts, when creates a sense of pleasure.

Humans are also just hardwired to enjoy new experiences — and seeing Bradley Cooper in your bodega certainly counts as a new experience. When new stimuli are introduced, the brain releases dopamine, making you happy, and new stimuli also demand your attention, making you consumed. While researchers aren’t quite certain exactly why surprises dominate our thoughts, we do know that people are 72 percent more likely to direct our attention to something new than something we are accustomed to. Other research has found that surprises also intensify our emotions by 400 percent — hence the screams that come with being in the presence of Justin Bieber.

With intense emotions, comes the crying. which essentially happens whenever someone is overwhelmed with emotions. Positive feelings tend to overwhelm people, and to regulate that emotion, negative expressions emerge. Are people sad to see Dwayne Johnson? No. That’s not scientifically possible. Their brains just smell what he’s cooking.