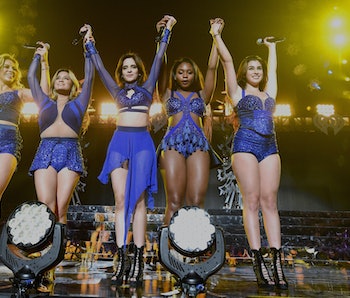 We’re only a few months into 2016, but pop music has already experienced some beautiful highs. Zayn Malik’s first solo record Mind of Mine justified his decision to break up with One Direction, Sia’s This is Acting marked the singer songwriter’s seventh consistent solo release, and Charli XCX’s Vroom Vroom EP found the British pop star headed in an exciting and dramatic new direction. While we’re still listening to some of the immaculate pop releases from earlier this year, some major pop divas are bound to steal the spotlight in 2016. Here are some forthcoming pop albums to watch this year.

Fifth Harmony’s 2015 debut album Reflection espoused girl power and confidence at its most untouchable. The five-member pop group assembled on the second season of The X Factor fit in perfectly with 2015’s abundance of self-love campaigns, but we recently learned that they’ll go for something a bit more vulnerable on their follow-up album 7/27, out May 20th. So far we’ve heard two singles from the record, the pun-filled, glossy “Work From Home” and the more club-ready, synth-driven “The Life,” both of which are irresistible. Even if the first singles from 7/27 aren’t necessarily representative of this vulnerability, they’ve sufficiently pumped us up and pulled us in closer for the emotional reveal.

Ariana Grande proved her vocals were a force to be reckoned with on her debut album Yours Truly, but the public sensed she lacked a major pop-star personality. But that’s changed in the three years that have passed. Since the infamous donut licking incident, calling out two radio hosts for being sexist, and a lauded Saturday Night Live duel host-and-guest performance, Grande has shown that she’s more than just a huge voice and a high pony. The title of her upcoming album Dangerous Woman suggests a bold rebranding, and the singles we’ve heard so far— the robust, confident “Dangerous Woman” and the inspirational, deep house-inspired “Be Alright”—support that.

And so continues the saga of Disney Channel stars turning into pop stars. Zendaya has been releasing music since she was 13, but her upcoming album implies a self-assured transition into adulthood. We’ve heard the skittering “Close Up,” which Zendaya debuted in a fashion film for Vivienne Westwood, and the TLC-sampling, Chris Brown-featured “Something New,” both of which mark Zendaya’s foray into a more adult R&B landscape. She released a self-titled debut in 2013, but the Zendaya we’ve grown to admire over the past few years wasn’t there. A lot changes between the ages of 16 and 19, especially when that person has spent the majority of her young life in the spotlight. She may be headed for a Hannah Montana-Miley Cyrus transformation, except that Zendaya appears to put grace and chicness over shock value.

Ella Marija Lani Yelich-O’Connor, better known by her stage name Lorde, deserved a long break after a promising 2013 alt-pop debut Royals Three years is long enough, though. Since the release of Royals, Lorde has attended fashion week shows, accompanied Taylor Swift onstage during her 1989 tour, performed a tribute to Nirvana and David Bowie, and sang on Hunger Games and Disclosure tracks. On the last day of 2015 she [tweeted] that she was “feeling quite excited” about 2016 and that she had whispered the name of her upcoming album to her mom in the car. We’re three months into 2016 and still no singles or an album name, but it’s best she takes her time to release a consistent follow-up to her game-changing debut.

It’s been a whopping ten years since Fergie came out with her only solo album, Dutchess, an undeniably great encapsulation of the former Black Eyed Peas member’s capabilities as an individual pop star. Charlie Puth confirmed that he worked on a song with Fergie for the new album, and Roccstar, another collaborator on the album, said that the album will showcase an “edgier” side of Fergie. Perhaps the most exciting reveal is that Fergie worked with Nicki Minaj on one of the songs, which hints at a refreshed and more relevant Fergie. Some outlets gave Double Dutchess a March release date, but that doesn’t look too promising. One of Fergie’s collaborators, however, posted an Instagram from the studio a few days ago with a caption that said she and her team are putting the finishing touches on the album. At least we know it’ll be here soon.

Dawn Richard, aka D∆WN, will release her third solo album at some point this year, although a definite date hasn’t been decided. The former Danity Kane member’s first two solo albums Goldenheart and Blackheart were two critically-acclaimed pieces of proof that Richard belongs on her own. So far, we’ve heard three singles from the forthcoming album, the vibrant “Dance,” “Hollywould,” and most recently “Not Above That,” a Machinedrum-produced topsy-turvy banger.

Sky Ferreira’s sophomore effort Masochism, the follow-up to 2013’s delayed but worth it Night Time, My Time is due out at some point this summer. The new project has executive production from Kanye West collaborator Mike Dean and supplementary production from Ariel Rechtshaid (who produced Night Time, My Time) and Kendrick Lamar collaborator Rahki. In a recent interview Ferreira detailed the themes and songwriting process behind Masochism, a name that came to her when she began writing on tour two years ago. At that time Ferreira believed, “If it doesn’�����������������������������������������t hurt then it’s not real,” a destructive and painful train of thought that ultimately led to the catharsis of writing music for the upcoming album. After the delay of Masochism, Ferreira took to Instagram on the last day of 2015 to say, “I refuse to put out something that isn’t honest. It’s not something that I can force out.”

At the end of 2015, Britney Spears confirmed via Twitter that a ninth studio album is on its way. Songwriters Justin Tranter and Julie Michaels, the infamous duo who penned Bieber’s “Sorry” and Hailee Steinfeld’s “Love Myself,” confirmed studio time with the singer in addition to EDM singer Matthew Koma. Spears has busy since 2013’s mediocre Britney Jean with her Las Vegas residency, “Piece of Me,” that she extended through 2017, but we’re all waiting for the queen to redeem herself with this next album.

Shakira recently confirmed that she’s working on her 11th studio album by posting a picture on Instagram with longtime collaborator Luis Fernando Ochoa with the caption “Writing songs!” Shakira’s and Ochoa’s previous collaborations have featured both English and Spanish lyrics, making it likely that the upcoming project will be a bilingual one. Shakira has been on the down low since she gave birth to her second son in January 2015, aside from her current Zootopia hit “Try Everything”.

Lady Gaga has been nothing short of busy with a recent Golden Globe win, a breathtaking performance of the National Anthem at the Superbowl, and a tribute to David Bowie at the Grammys among other huge moments. Somehow, she still finds time to work on her pop career: she confirmed to reporters backstage at the Golden Globes that her next album would be out sometime this year. Fans are calling it LG5 although an official name hasn’t been released, and it follows 2013’s Artpop and 2014’s collaboration with Tony Bennet on Cheek to Cheek.