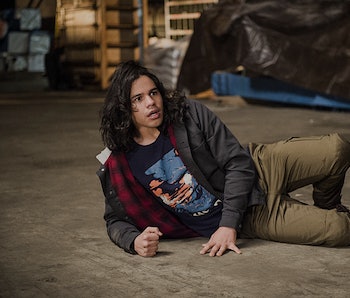 On his first day at S.T.A.R. Labs, in the Season 1 episode “The Sound and the Fury,” fresh-faced engineer Cisco Ramon sports a graphic t-shirt underneath an ill-fitting blazer. “Keep Calm and Han Shot First” it reads. It’s nonsensical and dumb — just the kind of dumb shirt someone would buy at Comic-Con. But Cisco isn’t dumb. He’s passionate, and it’s his passion that’s made him one of the best characters on CW’s The Flash.

In comics, Cisco Ramon is the alter-ego for Vibe, a breakdancing superhero who could create shockwaves that can shatter steel. He debuted in Justice League of America Annual #2 in 1985 by Gerry Conway and Chuck Patton, and he’s a lot of fun. But in DC’s television Arrowverse, he debuted in the Arrow Season 2 episode “The Man Under the Hood”, and he wasn’t fun. “This guy is supposed to be a lead in The Flash?” I thought. “These kids?” Carlos Valdes and Danielle Panabaker are fine actors, but their chemistry was as electric as a wet willy. I actually wondered if The Flash would be a disaster.

And then The Flash premiered, and it wasn’t a disaster. And eventually, it became great, then sublime, and now every week The Flash shines as the best the superhero genre can offer. But while it’s titled after one character, The Flash isn’t quite The Grant Gustin Hour. No, The Flash is driven by its rich characters troubled with imperfections, each with defined wants and needs and fears, and Cisco has been among the best.

You think his haircut is stupid, at first. You think, Oh great, he’s the jokester chliche. Indeed, Cisco was almost as idiotic and eye-rolling you’d assume him to be — at first. But over time, the nerd found his groove and by Season 1’s “Rogue Time,” Cisco’s relatable backstory spoke to anyone who felt inferior in their families, and cemented Cisco as an inseparable part of The Flash.

The push for diversity in television and movies isn’t a conspiracy of political correctness, but a movement to help the audience that watches these shows engage on the sort of profound level on which they haven’t been able to with American pop culture. (And also, it’s pretty profitable.)

Cisco, the fanboy of S.T.A.R. Labs, is the primary audience analog into the fictional world. Nerds are just enthusiasts at heart, and Cisco is enthusiasm personified, fandom given form. He exists to cheer Barry, who inspires him to use his own talents — his intelligence, his ingenuity — as his own superpowers. (We’ll get into this actual “vibes” later.) He’s Flash’s millennial Jimmy Olsen, armed with a smart mouth instead of a camera. His dopey names for Flash’s rogues went from a bad running joke to an indelible part of series mythology, and now whenever there’s a casting announcement for a Central City baddie I get excited just to hear how Cisco comes up with it.

It’s been a pleasure seeing Cisco grow into his own identity, especially as Vibe. Season 2 has been a constant growth for Cisco, and with his meta-human abilities to find other metas — and see into the future — Cisco has elevated from the guy on the sidelines to the guy in the spotlight. This week’s episode, “Flash Back,” Cisco casually fired at an escaped Time Wraith like it was nothing, a true step up from when he cowered at Deathstroke the first time we met him. And while Cisco can’t fight (yet?), seeing his evolution has been anything but boring.