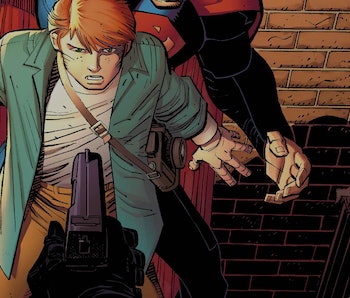 James Bartholomew Olsen, “Jimmy,” to his friends, passed away this weekend, on assignment in Zack Snyder’s Batman v Superman: Dawn of Justice. Olsen was a passionate, wide-eyed journalist for the Daily Planet and best friend to Clark Kent. He would tell you in a heartbeat: his inspiration is, and always will be, Superman, the Man of Steel. He died from a bullet to his head. Sources say Zack Snyder fired the gun.

Let’s not be bogged down by mythology. No matter what adventures these characters embark on, Jimmy Olsen and his pals are always understood in the abstract. Superman represents hope and resiliency; Batman, the control against chaos; and Jimmy, good ol’ Jimmy, is about having faith, even in the impossible.

Introduced in 1941 in Superman #13 (with an unnamed “cameo” in Action Comics #6 in 1938), Olsen is the personification of optimism and golden-age patriotism.

But in the decades after his debut, nothing fazed Jimmy. Not World War II, not McCarthyism, not the death of MLK, not 9/11, not the 2008 financial crisis. Jimmy did his job and just kept believing in Superman. He also did some weird shit, mainly in his solo series, Superman’s Pal Jimmy Olsen, published during the height of the late-Civil Rights era and the Vietnam War (known as the Bronze Age of Comics, when comics started growing up with their audiences). There was the time he got the Elastic Lad serum that let him stretch like Plastic Man (issue #62), that time he learned he was the reincarnation of Spartacus and Marco Polo and used their skills to, um, kung-fu kick a leopard, and that time he baked a cake with Satan. Yeah, he was weird; but Jimmy was fun.

He was brought to life on screen several times, from the iconic Adventures of Superman TV show, when he was played by Jack Larson (whose popularity led to the creation of the Superman’s Pal comics) to the faithful Richard Donner films, where he was played by Marc McClure, to the coming-of-age YA drama Smallville, during which he was portrayed by Aaron Ashmore. Then there was Sam Huntington, who in Bryan Singer’s Superman Returns — a continuation of Donner’s movie — brought precisely the Jimmy we know to a modern, post-9/11 world, completely unchanged by the years.

Jimmy was absent in Zack Snyder’s first Superman movie, 2013’s Man of Steel. Given that it ended with Clark’s first day at the Daily Planet, it made sense that Jimmy wasn’t present. But joining the franchise turned out to be a very bad thing for Jimmy; during Dawn of Justice, a terrorist shoots him in the head.

Batman v Superman, which pitted Superman against his greatest ally and opposite Batman was a grotesque, nihilist affair, with Man of Steel who was less Superman and more Dr. Manhattan. He was constantly reminded that he didn’t belong here, and was weighed down by his gifts to a world that didn’t seem to want them. In Superman Returns, Lois won the Pulitzer for “Why The World Doesn’t Need Superman.” In Dawn of Justice, it was written on picket signs at the Capitol.

It was a world that needed Jimmy Olsen the most, someone who’s bright optimism could prove Superman is the day to Batman’s night — the hope that his Kryptonian “S” supposedly stands for. Instead, he was shot in the head.

Jimmy Olsen is dead, but maybe he has been for a while. Though still in its freshman year, the very light of Supergirl on CBS has Jimmy Olsen. But he’s James Olsen, and he’s not a kid in a bow tie. Played by the impeccably handsome Mechad Brooks, 2016’s “Jimmy” is James, a walking Esquire cover with a baritone voice who makes Kara, an alien who can lift a spaceship, totally at a loss for words when he’s around. (I like him as Jimmy, for the record).

If we can’t have Jimmy, we need him to be James or not here at all. When our superheroes are as grim and dark as the villains they fight, there’s no reason for Jimmy Olsen to root for them. So we shoot him in the end.