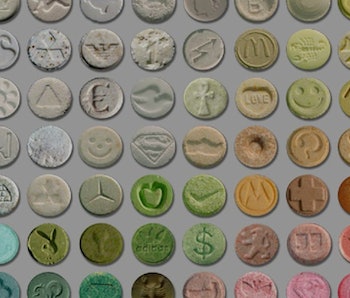 Researchers have concluded that MDMA — otherwise known as Molly; otherwise known as methylenedioxymethamphetamine; otherwise known as Millennial aspirin — is one of several psychedelic drugs useful in the treatment of post-traumatic stress disorder. As Phase 2 of the Multidisciplinary Association for Psychedelic Studies’ MDMA-assisted psychotherapy study comes to an end, the non-profit research and educational organization plans to meet this spring with the FDA to plan crucial Phase 3 clinical trials, which could lead to a new kind of prescription. And the application likely won’t end with PTSD. Because MDMA is known for increasing feelings of trust and compassion towards others, it’s an ideal adjunct to psychotherapy.

But, hold up. Before you go out seeking ecstasy or molly sold on the street to treat whatever ails you, you should be aware that while these substances may contain MDMA, they’re also mixed in with uncertain and dangerous adulterants. In laboratory studies, it’s only pure MDMA that has been proven sufficiently safe for human consumption when taken a limited number of times in moderate doses.

Inverse spoke to Brad Burge, MAPS’ director of Communications, about what his organization has learned from its MDMA trials so far, what he’s learned talking about the drug, and — because it’s unavoidable — politics.

Can you tell me about the next exciting phase of your MDMA-assisted psychotherapy study? When can we expect MDMA to be approved as legal medication in the U.S.?

Our Phase 2 study has treated 136 people, and Phase 3 will involve 200-400 subjects with PTSD from all sorts of causes across the U.S., Canada, and a lot of different countries. Phase 3 starts around 2017, and it will take four to five years to finish. So that will put it at early 2021 for FDA approval.

What sort of trial groups have you already experimented with?

So far we’ve looked at PTSD in everyone. We’ve had one trial in the long term, that’s now in the one year follow-up date with primarily veterans, as well as with police officers and fire fighters who were first responders at 9/11. So that study also involved the army, the marines, air force, all sorts of military groups who had served in Afghanistan, Iraq, Vietnam and Korea. The other major group of people were female survivors of sexual abuse or assault.

Can you just talk a little bit more about MDMA, how it differs from other psychedelics? Why is MDMA is particularly conducive to treating PTSD?

A traditional or classic psychedelic like LSD or psilocybin, they’re very popular, they get a lot of press, and are very strongly attached to the ‘50s because that’s when they emerged for popular use by Americans. Those kinds of drugs tend to form powerful visual-audio hallucinations. They also tend to cause a feeling of what a lot of people call cosmic interconnectedness, a sense of loss of self, or a deeper connection with their immediate environment. With MDMA, it’s a totally different class of drug. It’s more related to mescaline than LSD or psilocybin. When people take MDMA, they don’t tend to have visual effects or strong hallucinations. They don’t have out-of-body experiences or go into other states or dimensions, which often happens with LSD. With MDMA, people tend to stay more grounded. They become more aware of the feelings that they’re having inside their body, which is very useful for psychotherapy and dealing with psychological trauma.

Also, MDMA has a direct effect on the amygdala that other psychedelics don’t seem to have. MDMA affects the part of the brain that’s mostly responsible for fear, the flight or fight response. With people who have PTSD, their amygdala is hyperactive. MDMA directly reduces that; we see it in MRI brain imaging. So when people are recalling their trauma in the context of a therapy session, they don’t freak out at that same level of chemical activation. I like to call it a “chemical security blanket,” because people remain self-aware even while they’re talking about their difficult state.

So would you say that MDMA is more effective in treating PTSD than, say, using medical marijuana, which is more available at the moment?

They’re different. In the marijuana study that we’re developing, people smoke different strains of marijuana for the treatment of PTSD. But we don’t expect that people are eventually going to smoke enough marijuana that their PTSD is going to go away. Rather, marijuana helps people to cope, to help dull the effects of PTSD, to help them sleep better at night and reduce paranoia, that kind of thing. But with MDMA-assisted psychotherapy, the model is that people are getting to the root of their trauma. And that’s what we’ve seen going on in the studies. It really only takes 2 to 3 sessions to achieve a significant reduction in their PTSD symptoms to the point where, even years later, people still aren’t exhibiting symptoms.

Is MDMA effective in treating any other kinds of illnesses?

So what has been your success rate so far with MDMA, in comparison to currently approved FDA drugs?

Well, the current FDA approved drugs are essentially anti-depressants, and have to be taken everyday. Up to a third of people who have taken them for years still don’t see any significant decrease in their PTSD symptoms.

Have you ever recorded any negative side effects from your patients after using MDMA?

There can be acute nervousness or anxiety during the psychotherapy session, but that’s to be expected, because again, that’s the drug bringing out the effects of PTSD. You want to bring up anxiety, but it’s reported as a side effect. There’s also heightened cardiovascular activity - you might get a slightly higher heart rate or a slightly higher blood pressure level. But in all our studies so far, we’ve kept the blood pressure constant to that of the room. Out of the 136 subjects who were treated in the Phase 2 studies, only one 50-year-old male had an elevated heart rate. The physician on-site decided, “Oh, we’re not so sure about this,” so the patient went to the emergency room and was released later that day with no treatment. That’s the worst case we’ve seen in all of the trials.

Has there been any particular resistance to your study from Big Pharma or certain advocacy groups?

Not really. The pharmaceutical industry hasn’t made any comment because they’re so focused on the development of drugs that they can take a large profit from. MAPS is talking about 23 million dollars to complete the development of MDMA-assisted psychotherapy, and is currently the only organization in the world funding clinical trials of MDMA-assisted psychotherapy. For-profit pharmaceutical companies are not interested in developing MDMA into a medicine because the patent for MDMA has expired. They’ll spend billions of dollars to develop drugs and different treatments, and they have income streams from that, and expect future incomes. So surprisingly, we haven’t encountered any direct resistance. The main challenge for us, in addition to developing a drug for the first time, is that, as a non-profit, we rely entirely on donations. We’ve only received one government grant from the state of Colorado for marijuana research and PTSD disorder. But as far as psychedelic therapy, MDMA in particular, it’s all been private donors and foundations.

Do you think mainstream America’s mentality towards psychedelic drugs as medicine is changing - and if so, why?

Yes, I think we’re seeing many changes in how Americans think about psychedelics. For the first time, clinical research results are providing hard data showing that, used carefully and in the right settings, MDMA and other psychedelics can dramatically enhance the effectiveness of therapy for PTSD, addiction, anxiety, and other mental illnesses. We’re also seeing a declining faith in the War on Drugs, and people are increasingly willing to put science before stigma when it comes to evaluating the safety and effectiveness of these powerful compounds.

Do you worry that if a Republican wins the presidential election it will jeopardize the progress MAPS has made?

It is possible that if an extremist or right-wing candidate is elected, they could choose to fight back against the growing field of psychedelic therapy research. That might be a political mistake, however, since MDMA-assisted psychotherapy is an extremely promising treatment for PTSD, and the PTSD epidemic among veterans, sexual assault survivors, and others. However the elections end up, we’re hoping that our future leaders will choose science over politics when making determinations about which treatments should be made available for people suffering from PTSD.