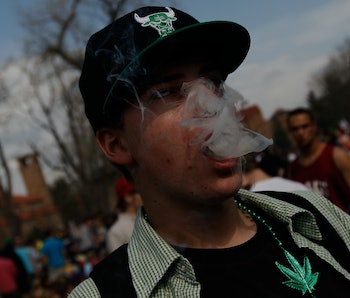 Since Colorado legalized marijuana in 2014, the state has seen an increase in green in every way imaginable. The Guardian reports that the state will pull in over $125 million in taxes and fees from marijuana this year, having brought in $73.5 million so far. That’ll be an eighth of a billion dollars for a state of 5.4 million people — a remarkable number, made even more outstanding when compared to Colorado’s other money-making ventures.

Looking at information available on the Governor’s Office of State Planning and Budget’s website, you can see just how lucrative marijuana taxes are for the state. Colorado’s cut includes a 10 percent state marijuana tax, 2.9 percent sales tax, and 15 percent excise tax, according to the state’s revenue department. Projections held that marijuana taxes would rake in $85.8 million this year and $103.1 million next year — but the Centennial State is way out in front of that schedule. That’s a bottom-line argument to get the plant on the books. Weed itself is not going to create a windfall, but marking it up with legalization will.

By comparison, alcohol, marijuana’s chief intoxicating rival, brings in about $40 million a year in excise taxes — a third of what pot counts in total, but a figure that doesn’t include sales taxes on alcohol. The Associated Press reports that “alcohol likely still produces more overall tax money than pot,” but still, we’re in the neighborhood. As pot continues to ingratiate itself on the respectable mainstream in Colorado — which the Guardian finds is happening faster than expected, hence pot blowing past previous projections — weed may overtake alcohol, at least in the state’s coffers.

It’s one thing to say “Legalize it! It makes money!” And something else entirely to have the figures to back that up. Every state finds a way to make money, but Colorado has shown that it’s much more efficient than all other profit-making ventures. Selling and printing green are pretty much the same things.