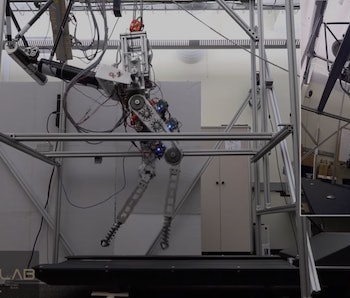 There’s another agile robot stomping around, and this one moves a lot like humans. The Advanced Mechanical Bipedal Experimental Robotics (AMBER) Lab at Texas A&M University is designing a bipedal machine called Durus-2D that mimics the way humans walk and jog. The research group posted a video today of Durus-2D running on a treadmill, its metal ligaments bobbing and springing up and down like our legs.

While Durus-2D isn’t as fast as MIT’s quadruped cheetah robot, which can run up to 28.4 mph, just edging out Usain Bolt’s 27.44 mph time at the 2009 Berlin World Championships, it’s impressively fluid in its movements. In order to make Durus-2D move like we do, the researchers collected walking data from humans and analyzed the data to figure out how the muscles and bone constrict movement. The end result is a robot that is a little less perfect, and a little more human.

Robotics can be used to help those who struggle with mobility. The researchers believe robots like Durus-2D could be a great assistance to amputees.

Durus-2D, built by SRI International and implemented by AMBER, is a planar 2D robot that uses algorithms to control locomotion. The robot was developed by Aaron Ames (read his résumé) and his research group — the same minds behind NASA’s Valkyrie humanoid robot that could work in deep space.