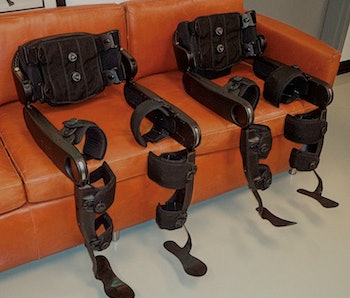 The FDA has approved the commercial distribution of an exoskeleton built by engineers at Vanderbilt University and the Parker Hannifin Corporation, a motion and control technologies development company. The wearable robots named, “Indego,” is the neologistic lovechild of “independence” and “go.” After receiving a grant from the National Institute of Child Health and Human Development ten years ago, the engineering team tasked with the exoskeleton’s creation was committed to building a product that would facilitate independent living.

“The ability to walk seems to give people a kind of identity and self-worth,” Goldfarb tells Inverse. “It makes people feel human.”

Even though Indego is something out of science fiction, people had been trying to create exoskeletons since the 1890s when the Russian inventor Nicholas Yagn first designed a leg spring apparatus for soldiers. But it’s really just over the past 15 years that the technology was advanced enough to commercialize exoskeletons.

Sold at $80,000 each, Indego weighs just 26 pounds, which is less than half the weight of competing devices, and can be collapsed into five pieces for bagging in the trunk of a car. It also has a single-hand strapping and retention system that allows the user to take the apparatus on and off without any assistance. The whole exoskeleton operates with an iOS app and can be used for four hours on a single charge.

While Goldfarb says that he doesn’t think Indego will completely replace the wheelchair yet, it will help paraplegics enter places that are otherwise inaccessible, like airplane aisles and theaters. Simply being able to stand is a luxury many take for granted. Those bound to wheelchairs face osteoporosis, and digestion, cardiovascular, and bowel issues. Indego can mitigate those effects. It’s also the only wearable robot that has a rehabilitation technology — called functional electrical stimulation — which sends small electrical pulses to paralyzed muscles, contracting and relaxing them.

Around the time Goldfarb and his team began developing Indego in 2005, engineers in Israel were building ReWalk, the first exoskeleton ever approved by the FDA in 2011. The main difference between these two is the weight of the apparatus, says Goldfarb; ReWalk requires users to be between five-foot-three and six-foot-three to carry the approximately 51-pound device.

Parker Hannifin Corporation formalized agreements with several rehabilitation centers across the United States, and Indego has already been in use since November 2015 in Europe. Indego has also been chosen to partake in a Department of Defense study that will research and document the economic and health benefits of exoskeletons.

“20 years ago, robots were thought within the robotic research community as devices that you kept separate from people because they were dangerous,” said Goldfarb. “Now they’re highly integrated. People interact with Indego in an intimate way.”