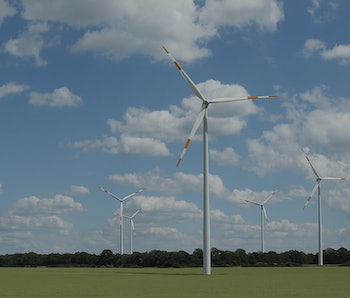 For the fifth time in the past eight years, American electricity sales have declined, compared to the previous year’s rate. In other words, American homes and businesses are using less power — and for the most part, that’s a good thing.

Electricity sales are a good measurement of how much power the country is using, and over the past decade, they’ve essentially flatlined. While there are spikes and dips in year-to-year usage, for the most part, demand for electricity has evened out, even as the number of homes, businesses, and devices using power goes up and the economy grows.

According to the U.S. Energy Information Administration, total electricity sales fell 1.1% in 2015 from where they were in 2014. Sales have fallen year-over-year five times in the past eight years, which the EIA says is due to a combination of factors. One of the biggest changes is efficiency — our appliances are steadily getting more and more efficient, so even as the total number of air conditioners, fridges, etc. goes up, their demand for power stays about the same.

In the past, electrical sales have been consistently linked with economic growth. As businesses, homes, and manufacturers expanded, they used more power — until recently. When U.S. manufacturing shifted overseas, the demands of electricity-hungry industrial factories dropped, and the ones that stayed got more efficient, due to federal and state regulations. But the economy is still growing, which means that America has decoupled the link between growth and energy use. In other words, we don’t have to use more power to grow.

One of the biggest changes in the past ten years is an increase in Energy Efficiency Resource Standards, which encourage utility manufacturers to make their products more efficient, instead of incentivizing them to use as much electricity as possible. Joe Romm at Think Progress has a comprehensive look at dropping electricity sales and energy efficiency, but the key takeaway is this (all emphasis is ours):

Utility decoupling, particularly when combined with EERS, drives investments in energy efficiency, which in turn helps the nation as a whole decouple electricity use from economic growth. Note that United States has achieved this decoupling even though most states have not enacted the optimum policies for promoting efficiency.

In other words, when the U.S. as a whole gets truly serious about energy efficiency, we can certainly achieve more savings than we already have — and keep it up for a long, long time.

Romm also mentions that continuing to invest in renewable energy sources means it’s actually becoming cheaper and cheaper for the U.S. to meet emissions goals that could start making a dent in the monumental problem of climate change.

In fact, America could even slash CO2 output by as much as 80 percent by 2030, all without raising electrical costs. In other words, the future of efficient, renewable energy is in our hands, but it’s up to us to take it.