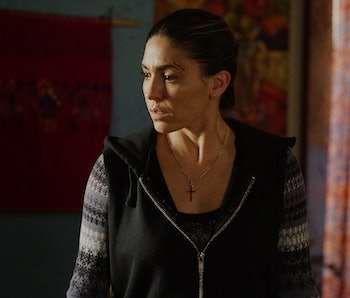 The answer is a soft yes to the former, and hard no to the latter. But this week’s episode, the tightly packed and well-made midseason return, “Bouncing Back,” is Agents of S.H.I.E.L.D. doing its darndest to matter.

First, Agents of S.H.I.E.L.D. wasted little time in “Bouncing Back” to reaffirm the official purpose. The collapse of the organization post-Winter Soldier and Gonzalez’s “Other S.H.I.E.L.D.” plot last year during Age of Ultron meant, for so long, we didn’t actually understand S.H.I.E.L.D.’s legitimacy. Until now. With President Ellis (reprised by William Sadler, from Iron Man 3) granting Coulson unofficial authority and a working partnership with the publicly-known ATCU formerly led by Rosalind, S.H.I.E.L.D. did some heavy lifting the movies haven’t bothered to do.

Also on the table is the show’s prologue to Inhumans, slated for 2019, introducing the alien replacements for mutants since Marvel doesn’t own those rights anymore. Season 2 of S.H.I.E.L.D. was the Inhumans’ debutant ball, and Season 3 is Daisy becoming the bridge between Inhumans and mankind. Through Daisy, Agents of S.H.I.E.D. will reveal crucial stuff about Inhumans, this week being their genes fulfilling evolutionary “weaknesses” thus amplifying talents. That’s obvious with Yo-Yo, otherwise known as Slingshot (guest star Natalia Cordova-Buckley) who can run and return to place within a heartbeat. That’s enough speed to make The Flash jealous. (OK, fine, Quicksilver.)

From redefining S.H.I.E.L.D.’s authority and exploring Inhumans, Agents of S.H.I.E.L.D. is exploiting its unique position to lead instead of follow. It may be for the dumb reason that Marvel’s TV people have a grudge against their movie rivals — there’s a real, actual Marvel civil war going on none of us are allowed to see — but Agents of S.H.I.E.L.D. is the go-to to for the 411 on the MCU. The movies won’t even acknowledge Inhumans for now, certainly not in Civil War since those writers admitted they don’t even watch the show. (This is damning since Season 2’s finale has huge ramifications: The ocean is contaminated with Terrigen crystals, meaning sushi dates or fish oil medicines are possible Terrigenesis transformations, but won’t be mentioned in Civil War.)

But that aside, Agents of S.H.I.E.L.D. returned strong in a marked improvement for Season 3. Daisy has come into her own, no longer needing to be spoon fed exposition (although that’s never lacking in genre and certainly not here, it helps since Daisy is arguably the protagonist). While not a lot has changed in the status quo since “Maveth,” everyone seems more comfortable, enough so that it may be a bummer when Bobbi and Hunter leave to do their own thing . And while I was let down that S.H.I.E.L.D. dropped Joey Gutierrez since the MCU can really benefit from more people of color, it is getting crowded at S.H.I.E.L.D. HQ.