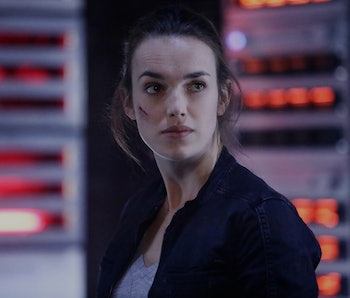 The mid-season finale of Marvel’s Tuesday night appointment Agents of S.H.I.E.L.D., titled “Maveth,” ended with a rather anti-climactic showdown between Phil Coulson and Grant Ward. It was a blood feud brewing since Ward’s defection to Hydra and intensified after his assassination of Rosalind. Coulson walks away victorious, but the war continues in the cliffhanger bumper that shows Ward back as malevolent Inhuman’s puppet. Is Ward’s possession a thinly veiled parable of the U.S. campaigns in the Middle East that have only begat more of today’s terrorists?

You definitely don’t need a political science degree to keep up. The parallels are all about two inches deep; Agents of S.H.I.E.L.D.’s socio-political commentary history tends toward vague allusions, at most. But hear me out: No matter what measures S.H.I.E.L.D. takes to defeat its obnoxious enemy (cut off one head, etc. etc. HAIL HYDRA!), smaller but equally resilient cabals form and pose new dangers. That has to sound familiar.

In “Maveth,” HYDRA sends Ward, a squad of goons, and Fitz to retrieve a powerful Inhuman on the deserted alien dimension Jemma was stranded on in between Seasons 2 and 3. Fitz uses the opportunity to rescue Jemma’s stranded space beau Will. Of course, since this is TV, the plan goes haywire. The Inhuman had assumed Will’s identity when it killed him right after Jemma returned to Earth. This results in Jemma and Fitz finally hooking up, natch, but the emotional release when Fitz and Coulson came through the portal (edited into slow-motion, no less) framed the loss with the high of soldiers back home and the all-too-real low when others didn’t.

Now, despite quashing the enemy, Coulson will have to confront a “new” Ward. A still-alive Ward. He’s a husk of his former self, maybe it’s not even Ward at all but just using his shitty body as a vehicle. But this new Ward went to Malick, his superior, not Coulson or anyone in S.H.I.E.L.D. Is it going to align with Hydra, or is it just hungry?

Ward has been one of the weirdest choices ever done by Marvel. His double agent reveal was one of the best I’ve seen since the first season of Homeland, but since then it’s been a rollercoaster of highs and middling lows. Ward started in Agents of S.H.I.E.L.D. as the obvious protagonist, an attractive and boring white-dude action hero. But the show’s connection to Marvel’s game-changing Captain America: The Winter Soldier revealed him as a HYDRA agent, and he’s been a ruthless son of a bitch ever since. His metamorphosis into full-blown monster has been among the reasons to stay tuned to S.H.I.E.LD. no matter how much the show has emptied out that well. “Fucking Ward!” is a thing I find myself barking to no one in particular whenever he gets away.

I don’t know what it’s like in the S.H.I.E.LD. writer’s room. Maybe they have tabs open to Politico or Salon and HuffPo while on Final Draft. Maybe not. If they were intending to be an action satire of modern U.S. diplomacy, then S.H.I.E.L.D. failed to make use of its misshapen Cold War allegories (when Captain America: The Winter Solider was hitting theaters) to really illustrate whatever statements it has about Islamic extremism.

A Variety interview with Brett Dalton doesn’t reveal who Ward has become, so all bets are off as to who from Marvel’s universe is the new threat. But two years later and Ward remains a headache for S.H.I.E.L.D. — cut off one head, as they say, and another takes its place.