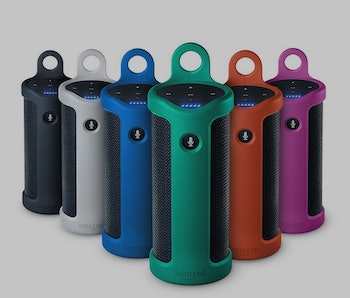 Before the disembodied voice of Amazon’s Alexa could even win a place in your heart, the company released an upgraded form factor for her. Available for pre-order today, Amazon Tap is a portable Bluetooth speaker that is inhabited by Alexa, Amazon’s virtual personal assistant software and spooooky ghost of convenience.

Not only will the new Alexa-enabled Tap speaker respond to plain language commands like “play The Clash on Spotify” or “turn it up,” but a host of other features and capabilities are just a grunt away. Have Alexa set a timer, fetch the weather for you, adjust the lights and thermostat of your smart home, order a pizza, and fetch general information for you.

Amazon demonstrates the new device’s capabilities in the following video, which features a lot of the major use cases for such a device:

Alexa debuted in a speaker format called Echo, and over time the cry from consumers must have been that they wanted Alexa to travel with them. Tap is a smaller device with a clip at the top, making it a snap to attach it a variety of places. As you ride your bike home, Tap swinging from your backpack, you might recall with a panic that you’re out of dog food, and re-order some in a flash (from Amazon, naturally).

This is Siri for someone who doesn’t necessarily want to have a high-dollar smartphone for Siri-style features. And if you’re a fickle music fan who’s going to be changing tunes often, why not make that effort as easy as speaking?

If you think the price is right at $130, you can order Tap today and receive it at the end of the month.