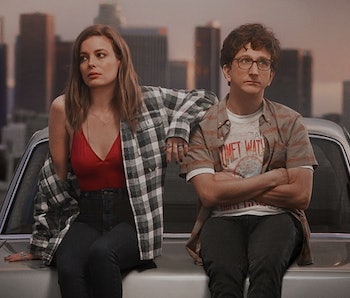 Romantic comedies were revived in 2015, not You’ve Got Mail style, but in the form of dark serialized comedies that followed two unlikable characters on the quest to become more likable, together. You’re the Worst’s second season delved into the mood disorders that sometimes lead to a person seeming like “the worst,” and Catastrophe found comedy in the non-cliche ways love can make adults act like children. What separates Love, Judd Apatow’s romance between drug addict Mickey and sad sack Gus from funny, from emotionally genuine fiction like You’re the Worst, Master of None, and Catastrophe is a lack of care and selflessness between its leads. So much of Love feels lifted from previous, superior media, and the most human aspects of Mickey and Gus are suggested to be the worst parts of them.

Love posits itself as the story of two equally fucked up people, but it was clearly written by a team more sympathetic to Gus. Mickey begins the series as a relapsed alcoholic who is selfish in her early relationships with Gus and Bertie, but she grows to accept that she has issues worth dealing with, and that ignoring them, rearranging her living room, and urging her friends to have fun isn’t going to fix what ails her. Gus, on the other hand, begins the series as a too-nice loser rejected by his girlfriend and ends the series as a too-nice loser who’s gained some self-esteem, thanks to sleeping with new women and briefly holding an exciting job as a TV writer. When Gus kisses Mickey in the series’ final moments, just after she admits to being an addict, there’s a sense that the audience is supposed to feel a power shift between the two characters. That dampens any belief that Gus and Mickey belong together, and it hurts the series as a whole.

Consider Gretchen and Jimmy on You’re the Worst. Though they alienate other characters by being selfish and apathetic, their shared repulsiveness makes them a cohesive unit. They’re a functioning couple, and aside from Gretchen’s alcoholism and depression, and Jimmy’s naïveté and artist’s ego, the traits that make them classically difficult characters make them more familiar, and thus more attractive, to each other. Gretchen’s depression gets in the way of her relationship with Jimmy. In contrast, Mickey’s addictive personality is likely the only reason she’s involved with Gus.

Wishing Love were better is not a critique of the recent influx in romantic comedies following two classically unlikable characters. In fact, it’s in praise of this formula, recognizing that Love misses the mark that is hit so directly in other series. Master of None doesn’t endeavor to make its leads, Dev and Rachel, particularly offensive, but it still succeeds in presenting a romance that is complicated and messy.

It’s not clear in Master of None whether Rachel and Dev will benefit, in the long run, from staying together, and in fact, the show leaves them in separate places, both planning to be apart from each other. Their shared experience, however, living in an apartment and building a life together, is portrayed as a useful and healthy experience. That is a more effective comment on millennial romantic relationships; in the absence of previous generations’ experiences, spending their late 20s and early 30s married, the demographic Love, You’re the Worst, and Master of None hope to reach is still experimenting with what love could look like today.

Master of None poses the suggestion that longterm monogamy may not be the right choice for many of us. You’re the Worst urges us to pursue emotional and physical intimacy without forcing each interaction into the template our parents set out for us. Love delivers a mired hypothesis that almost suggests humans “deserve” each other; Gus is a quintessential “nice guy” who doesn’t express his opinions and expects his romantic partners to jump through hoops to guess at what he wants, and he punishes them with the silent treatment when they fail. The show does nothing to prove him wrong. Rather than glorify the concept of personal growth, as even Catastrophe does, with its similarly quirky leads who are actually in their 40s, Love’s core feels hollow, as if a relationship is a temporary shelter from a cruel world. The best romantic comedies, even the darker ones meant for disillusioned millennials, still portray love as a transformative, healthy experience. Isn’t that what the classics wanted us to believe — that we’re all better off together?