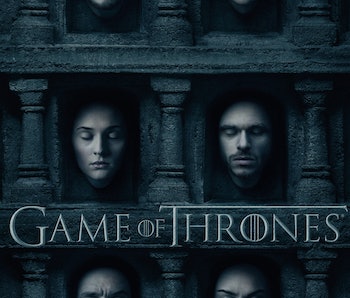 Game of Thrones alternates between teasing us, taunting us, and straight-up fucking with us in advertising its upcoming sixth season, and it’s glorious. Some fans are vexed that we have yet to see a preview with concrete footage, but they’re missing the point. As a massively popular adaptation that is now moving beyond its original narrative, Game of Thrones is an unprecedented cultural event.

Much has been made of our current tendency to spoil movies and shows in the trailers. As Damon Lindelof told Vulture, “We live in a commercial world, where you’ve gotta come up with ‘trailer moments’ and make the thing feel big and impressive and satisfying, especially in that summer-movie-theater construct.”

Because so much about Game of Thrones sixth season is a mystery, giving away any “trailer moments” would lessen the impact of seeing them play out. It doesn’t even have to be Jon Snow’s return; we have no idea what the hell is going on with Sansa or Theon, either. They’ve wandered off-page into the unknown. Keeping it under wraps is the right call.

Joss Whedon, too, has talked about the frustration of giving away story beats in the trailer.

Game of Thrones isn’t leaving us totally in the dark, though. It has dropped tantalizing teasing clues about Jon Snow that the internet continues to eat up.

Therein lies its brilliance: Speculating is, in some regards, more fun than knowing. How many times have you been underwhelmed when a movie or show unveils its Big Moment because you already saw it in the trailer? Instead of landing with an explosive “wow!” it lands with the dull thud of a “huh, all right, so that’s how that happens.”

The best entertainment doesn’t spoon-feed us but rather gives us the tools to find our own way. Game of Thrones’ road ahead looms dark and full of terrors, and we wouldn’t have it any other way. Other shows, look to this enigmatic less-is-more advertising method. We guarantee, big trailer moments will have an even bigger impact when they’re not in the trailers.