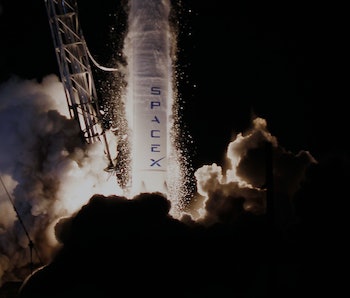 Space X says the launch is off for February 24, but they’ll try again at the same time on Thursday, February 25. The launch window is the same, roughly 6:46 p.m. EST, but the team is hoping for better weather conditions. The Falcon 9 Rocket is doing fine.

Elon Musk’s SpaceX program is set to launch another Falcon 9 rocket tomorrow, but they don’t expect it to go very well.

The Falcon 9’s biggest goal at the moment is to successfully land one of its rockets on their giant floating football-field droneship, aptly named “Of Course I Still Love You.” Tomorrow’s launch is going to be particularly tricky, because the weather in Cape Canaveral is vaguely inhospitable for launching rockets at the moment, but SpaceX says there’s still a 60% chance that they’ll go ahead with the launch.

They’ve already successfully landed a Falcon 9 on a landing pad on solid ground, but for the program to be viable down the line Musk says they have to be able to land on the droneship.

The last Falcon 9 launch back in January got so very close to sticking the landing on the droneship, far closer than the previous two attempts to land on “Of Course I Still Love You.” Unfortunately, one of the rocket’s four legs didn’t quite catch, and this happened:

The current Falcon 9’s mission is to deliver SES-9, a commercial communications satellite into orbit for SES, a global communications firm. The new satellite will provide broadband internet, TV, and mobile communications services to more than 20 countries in Southeast Asia. Fortunately for SES, getting the satellite in the sky isn’t the problem, it’s getting the rocket to land in one piece that is. The rocket will take off around 6:46 p.m. Wednesday, weather permitting, and start its descent back to Earth about 31 minutes later. At that point, it’s at the mercy of the rocket-gods, as the particular Geostationary Transit Orbit it’s trying to hit is not conducive to a soft landing.

“Given this mission’s unique GTO profile, a successful landing is not expected,” SpaceX said in a press release. The company is usually pretty optimistic about these things, but have learned to to take their knocks as they come and celebrate when things are good. So while a successful landing tomorrow night may be a long shot, that’s never stopped SpaceX before.