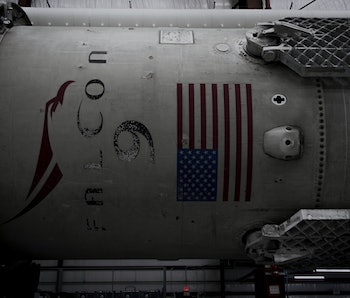 The landing of SpaceX’s Falcon 9 rocket was a coup for the aerospace industry, both private and state-sponsored. But that doesn’t mean CEO Elon Musk is slowing. SpaceX has been uploading pictures of its pioneering rocket — which looks largely unscathed — to Flickr, and CEO Elon Musk has noted on Instagram that it’s “ready to fire again.”

The rocket, which vertically landed on Earth after deploying GPS satellites into orbit on December 21, still looks like a shimmering piece of machinery, minus some residual burns it might have accrued while touching its blazing engines down on Earth:

Even still, it seems more than viable that SpaceX will cash-in on the prospect of cheaper spaceflight by using parts of the same rocket for a future mission.

“I think, probably sometime next year, we will aim to re-fly one of the rocket boosters,” Musk told reporters last month.

The largest hurdle for SpaceX — the one that tormented Elon Musk’s psyche — was the very feat of landing a rocket on Earth after reaching an orbital domain of space.

Much of 2015 was fraught with setbacks for SpaceX, chiefly when a Falcon 9 exploded last June, but it seems that the immediate future might be one of promise for the company.

The stage of the Falcon 9 that SpaceX uploaded to Flickr won’t go back into orbit, Musk has said. The company intends to preserve it as a piece of history, or an aerospace artifact, if you will.