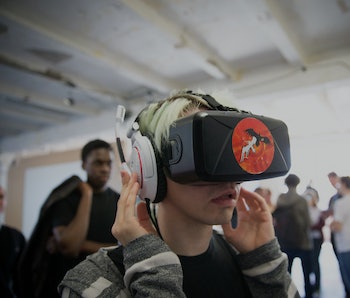 Before you rush out and buy an Oculus Rift, you should make sure you’ll actually be able to use your virtual-reality future-goggles. For that you’ll need a computer — a really, really good one, specifically. Fortunately, Oculus has partnered with several retailers to release bundle packages with a Rift-ready PC and the Oculus headset and developer kit.

But with price tags starting at $999, even with a pre-order discount, are they worth it?

Each bundle includes an Oculus headset and all its peripherals — Xbox controller, two games, sensor, and cables — which we now know will retail for $599. The Oculus’s recommended specs are pretty demanding — NVIDIA GTX 970 or AMD 290, Intel i5-4590, and 8GB RAM. The graphics card alone runs for about $350, sold separately, and the processor is $215, which, added to the $599 Oculus means at the low end of the pre-sale bundles, you’re getting a reasonably good deal. Make sure to factor in though that pre-sale computers will not include other expensive peripherals — monitors, keyboards, and especially an operating system, which will significantly jack up the cost even more. So depending on your current setup, it might be worth it to download the Oculus compatibility tool at the bottom of this page and check where your computer needs improvements to support the Rift, rather than rushing to buy a whole new computer and succumbing to the pre-order madness.

Otherwise, toss some money at Palmer Luckey and get ready to jump into the action on day one.

More like this
Innovation
8.11.2022 11:00 AM
“Quantum materials” could give the human brain a run for its money, scientists say
By Nathaniel Scharping
Gaming
8.11.2022 1:30 PM
Overwatch 2 is ditching the game industry's worst feature
By Willa Rowe
Innovation
8.10.2022 9:00 AM
Scientists may have revealed the ancient secret behind China’s Bronze Age
By Sarah Wells
Related Tags
Share: