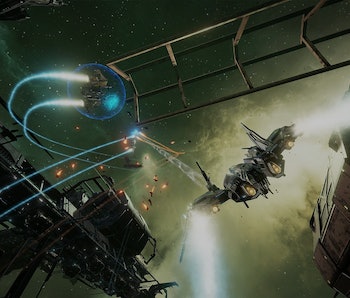 Complaints about bleeding-edge costs of technology, software jitters, counterarguments that the price was right, and wild speculation about the future didn’t make Wednesday’s Oculus Rift preorder launch unusual. What was unusual — and has been somewhat lost in the coverage of Facebook’s first consumer tech foray — is how deftly Oculus slipped two games into its package deal with the Rift.

Including platformer Lucky’s Tale and spacefarer Eve: Valkyrie may seem like a savvy PR move, particularly in light of botched expectations regarding price. But dismissing this as nothing more than a gift to early adopters would be missing a trick. Good content, at launch, is critical to VR’s survival. This doesn’t quite reflect what normally happens when a gaming console is released. An unknown tech diving into homes is arguably closer to something like a 3D TV, which as IEEE Spectrum notes, flamed out thanks to a lack of stuff to please people’s eyeballs.

The history of solid gaming suggests that consoles should be given a bit of a pass at launch. When the PS3 appeared — in November 2006, at $500 to $600 in then-money — it had 12 titles, mostly sports sequels and shooter sequels. None of these would go on to break ground in the way that, years later, Grand Theft Auto V and The Last Of Us did. Of course, no early console adopter expects out-of-the-gate games to match the polish of what comes next. Designers and developers need to feel out the platform, to update the toolkits they have. That’s how consoles have worked for decades, and it’s a truism also reflected in the lack of launch bundles. Maybe you’d saved ten bucks off of Playstation Plus when you bought a PS3, but Sony wasn’t throwing in Call of Duty 3 gratis. We all knew good shit was coming down the line, and we’d pony up when it came along.

Facebook and Oculus, on the other hand, need to sell both Rifts and VR writ large. On the developer side, the hurdle is creating new tropes for a new medium. On the consumer side, the hurdle is both price and fiddliness — you’ll need an above-average computer, as well as above-average comfort with concepts like calibration and USB 3.0 ports. Content makes the fiddliness worth it, and lowering the barrier to mind-blowing dogfights — by including it for free in the package — means Oculus gave itself a good shot at melting immersed neurons right off the bat.

Oculus needs to kick your ass. If you’re a casual or younger VR gamer, that’s Lucky’s Tale; but you have to imagine that Oculus really wanted to include what’s already been touted as VR’s killer app — Eve: Valkyrie — as part of the deal. Eve doesn’t need to slay forever, but it has to offer enough that the promise of VR’s Last of Us can be realized. Oculus’ preorder game was strong enough that VR will have more of a chance of finding its footing than 3D-TVs did. The Rift took off as well as you could expect. What comes next for VR, though, is an appeal to the content gods.