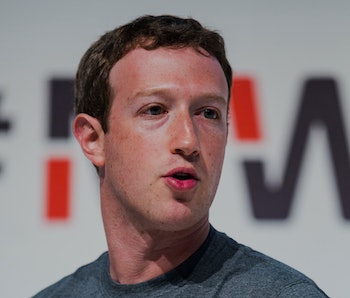 Indian officials today flatly denied Facebook’s plan to offer free access to stripped-down, popular websites — including, of course, the popular website known as Facebook — and, in so doing, disbanded a Facebook–Indian telecom firm partnership that had already been put into practice.

Facebook’s Internet.org project has been controversial from the start and its Free Basics program has proven to be a concept that is more difficult, semantically-speaking, to reject. It’s all intended to provide the world’s poorer populations with free access to select parts of the internet. India — with 1.25 billion citizens, many of whom live in poverty — seemed the logical place to start.

Facebook had joined forces with Reliance Communications around this time last year. TRAI, along with others, publicly denounced the alliance, deeming it a violation of net neutrality: by allowing users free access to only select, “popular” sites, Facebook was biasing the internet. In late 2015, TRAI requested that Reliance Communications temporarily halt the Free Basics program, at least until they made a decision as to its legality. Facebook’s response was to solicit positive reviews from Free Basics users. But the ruling on Monday nixed the deal.

Facebook responded on Monday, saying that the ruling was a disappointment:

Our goal with Free Basics is to bring more people online with an open, non-exclusive and free platform. While disappointed with the outcome, we will continue our efforts to eliminate barriers and give the unconnected an easier path to the internet and the opportunities it brings.

The Telecom Regulatory Authority of India crafted its own bit of careful rhetoric, titling the decision a “Prohibition of Discriminatory Tariffs for Data Services Regulations, 2016.” The gist is that data providers cannot enter into agreements with websites, apps, and companies to offer free, albeit limited, access. Facebook wanted to give Indian citizens a watered-down version of its site for free. The Regulatory Authority, though vaguely admitting that such programs could have “positive impacts,” ruled against the continuation of Free Basics, suggesting, among other reasons, that such programs are discriminatory and unfair.

Facebook, Google, and Apple all hosted quarterly earnings calls last month. Each company spoke about the importance of spreading its technologies to the developing world. And Zuck’s written about his dream of one day “connecting the whole world.”

In private earnings calls for investors, though, these claims take on a different tone. These same CEOs and CFOs speak not so much about rights as they do about enormous revenue potential. A glance at Facebook’s average revenue per user based on location illustrates the long-term motivation to “connect the whole world” in the way that the United States and Canada are connected.

The unconnected world, in these investor talks, is no longer seen as deprived and therefore deserving of basic rights. Underdeveloped starts to mean untapped customer bases. (“Once these citizens are hooked on the internet drug, there’ll be no turning back.”)

TRAI — and others, such as the founder and director of India’s Digital Empowerment Foundation understands this twofold motivation, and it’s not about to let Facebook, et al. swindle India into blind humanitarianism:

One of the key arguments forwarded for differential pricing is that it will serve as an effective tool for increasing internet penetration and providing affordable access to new users and thus benefitting the consumers. Users who learn of the benefits of the internet would then proceed to the paid version of the ‘full’ internet.

Which, TRAI thinks, is bad — if, contra-net neutrality, the limited access is restricted to just a few sites:

In India, given that a majority of the population are yet to be connected to the internet, allowing service providers to define the nature of access would be equivalent of letting TSPs shape the users’ internet experience. This can prove to be risky in the medium to long term as the knowledge and outlook of those users would be shaped only by the information made available through those select offerings.

Facebook, though, will surely keep up (what it would love people to consider) the good fight. It’s a battle for the ages, and those people already online will have no choice but to bust out the popcorn and follow the action. On popular websites.