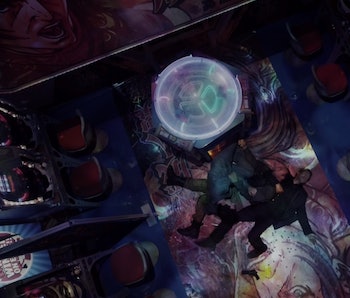 In the end, The Expanse never blinked. Its pilot episode was a well-put-together, if slightly confusing story that had the potential to turn into something really good, if it could follow through on its promises. And that’s exactly what it did. The show cleared up the confusion, developed its characters and world, and unpackaged an adequately intriguing central mystery. Nothing more, nothing less. Given the current dearth of hard science fiction or space operas on television, that’s a fairly sizable accomplishment.

Still, as solid as The Expanse has been, it never quite managed to transcend its initial premise to become truly special television. The label of Great Sci-Fi belongs to shows that manage to make that leap — often during their first season. After a strong pilot mini-series, Battlestar Galactica instantly cemented itself as essential sci-fi with “33,” its Season 1 premiere. Babylon 5 took some time to get going, but by the end of its first season, the show had shattered its initial procedural doldrums with game-changing moments of tragedy and shocking character shifts. Firefly, likewise, owes its dedicated following to the smaller character moments it peppered throughout its pilot.

To be fair, this first season of The Expanse certainly came close a few times. The fourth episode’s grand space battle was top-notch and last week’s tension-filled outing was extremely well done. Unfortunately, the show lacked that must-see spark. This week’s two finale episodes again had some extremely well-done sections — most notably the poignant death of Julie Mao and the growing chemistry between the two male leads, Miller and Holden. “You … told your crew to take off without you? Dick!” was a killer line.

There’s still nothing that would make me say, “Yes, you have to watch The Expanse!” if asked for a recommendation. It’s good; it’s slick; it’s a welcome addition to the TV landscape, but I will not be on the edge of my seat until Season 2.

The issue may well be that The Expanse is too slick. It has a specific aesthetic that leaves little room for deviation. Ambitious swings and formal experimentation are both often necessary for shows to make the leap from “good” to “must-see.”

Take breakout hit, Game of Thrones: like The Expanse, it too maintains a specific tone. But the complex adaptation defied expectations multiple times as its first season progressed, ending on the game-changing death of the supposed protagonist. Babylon 5 shifted from an episodic show to narrative-driven one with a clear big picture.

Shows like Buffy the Vampire Slayer and Star Trek again and again pulled the rug out from under viewers with daring ventures that included musical episodes, time travel, alternate dimensions, courtroom dramas, and dream episodes. These fascinating deviations were often the shows’ best episodes.

Battlestar Galactica, the show to which The Expanse feels most strongly related, deviated from sci-fi conventions by openly serving as a metaphor for post-9/11 America and the War on Terror.

BSG had meaning, something The Expanse still currently lacks. I have no idea what the show actually aims to be about. It has a strong plot and a decent cast of characters,, but falls woefully short on matters of theme and commentary. “Everything I loved was dying,” says Holden when Miller asks him why he left Earth. It is a morbid image, yes, but one that the show never quite committed to. With the solar system on the edge of all-out war, men experimenting with an unexplained biological entity, and the slaughter of a hundred thousand people, the show certainly has room to be more morbid — and more resonant.

The Expanse certainly gave itself a solid foundation and we can only hope that it will rise to the challenge. We shall see when the Season 2 airs at the end of the year.