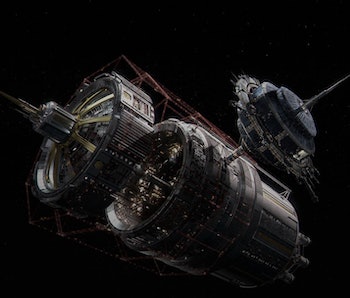 Star Trek and its descendants have made a science fiction subgenre, Wilsonian space opera, into a television norm. Those shows, including Babylon 5, Farscape, and, to a certain extent, Firefly, posited the universe as a colorful place, filled with planets, alien races, and easily resolvable tensions. Syfy’s new shows aren’t like that. Not at all. By eschewing uniforms for galactic chaos, the network formerly known for Sharknado is bringing interstellar chaos back to the fore.

And they’re doing it this week.

This week, the network will air the first episode of The Expanse, the first major attempt to put a space-based drama on screen since the end of Battlestar Galactica, and a mini-series based on Childhood’s End, one of the greatest science fiction novels of all time. Though these shows won’t give Syfy black hole-level gravity, they will restore its reputation and publicly alter its missions. This may be the one network on TV more focused on questions than resolution.

It’s not abundance that drives both shows, but constraints. In Childhood’s End the constraint is simple: We can’t leave Earth, where war and climate change and other disasters threaten the end of humanity — until an alien fleet shows up, ostensibly to help. In The Expanse, humanity has left Earth, but managed only to colonize Mars and the asteroids of the Belt, with a precarious web of resources, power, and humanity flowing between the three powers.

The Expanse’s greatest strength is when it embodies the perilousness of the specifics of its setting, as well as tin cans hurtling through space. The best and most tense of the show’s three storylines involves a small group of survivors fleeing the destruction of their ship. They squabble over authority and potential treachery even as they work desperately together on a lifeboat with decreasing air and virtually no power.

This is a story where a slip of the hand causing a wrench to tumble into the void is a potential disaster — a far cry from the cool, diplomatic decision-making of a Captain Picard or Sheridan. These are characters who rely on constant drug use to survive high stress, low oxygen, and lack of sleep. The gritty decisions of day-to-day survival, whether in a disaster mode or just a space station rationing water, have their own narrative drive.

The big question for The Expanse moving forward (I’ve seen the first four episodes, of ten this season) is whether it can integrate the grand political, interstellar war story it wants to tell alongside its more grounded plots. In addition to space survival thread, there’s also the story of a high-level politician on Earth, and a detective investigating a case and keeping the peace on the Ceres space station. Neither of these have a strong motivating force, and it shows — the three different focuses feel like distractions for The Expanse. The different threads are clearly all being braided together, but after a few episodes, they’re not there yet.

Issues of multiple plot threads are primarily formal — science fiction novels have become increasingly detailed and serialized, while prestige television shows assume comfort with bouncing between multiple storylines. Amusingly, Game of Thrones can be blamed on both ends for this, although even it, in television form, often struggles with multiple locations as well.

Childhood’s End has a similar problem combing from an entirely different direction. Mid-century science fiction was largely a short story-based medium, with writers like Asimov, Bradbury, and Arthur C. Clarke, who wrote Childhood’s End, crafting clever, funny, philosophical, and introspective little gems based on single questions or thoughts. In this case: Is it worth giving up freedom and curiosity for a sedentary utopia?

For Syfy overall, both of these shows are welcome because they’re good. The acting in particular is of unexpectedly high quality. Childhood’s End benefits from the gravitas of geek icons like Colm Meaney (Deep Space 9) and Charles Dance (Game of Thrones), as well as a solid supporting cast. The Dance casting is especially clever, as his cruel patriarch, Tywin Lannister, helped define Dance as the evillest dad in pop culture. Childhood’s End takes advantage of that to make its Overlords seem ominous, even at their most altruistic.

The Expanse’s big name is Thomas Jane, but it has some standouts in a less well-known cast. Shohreh Aghdashloo almost single-handedly salvages the exposition-heavy Earth sections of the show by portraying an older politician of both ruthless determination and gentle wisdom. Steven Strait also seems to be doing a strong Young Timothy Olyphant impression as main character James Holden. (Both series could also do with more comedy — The Expanse is sorely missing a Starbuck.)

Beyond getting good casts, Syfy’s production values overall are strong. It’s still TV science fiction — the CGI isn’t going to blow anyone away, but it’s solid enough. And the sets are interestingly constructed, especially with The Expanse seeming to work as a live-action Mass Effect. Even if they don’t always work, it’s clear Syfy has invested heavily in making respectable science fiction. It’s working so far, but there’s much more to do.