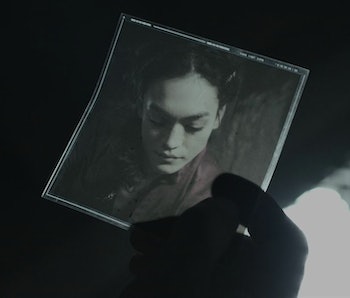 If The Expanse is going to become the next great science fiction epic, it’s going to be because this show has an absurdly strong attention to detail. This show feels lived-in, like every piece of it has a reason for existing, whether we’re told it or not.

In fact, that’s true of the very best science fiction (and fantasy). The original Star Wars succeeded in large part because everything in it felt well-worn, with a reason for existing. This feels supremely true on The Expanse, where some items or ideas are picked up and used, and some simply exist, potentially useful for the future. For Syfy’s biggest gamble, this is crucial for the network’s return to respectability.

On the show’s fifth episode, “Back to the Butcher,” the item most directly shown as part of the setting is coffee, which is given pride of place twice. First, it’s used to demonstrate Detective Miller’s (Thomas Jane) rule-breaking resourcefulness, when he has some on Ceres Station. At the end of the episode, Holden sips a cup he finds on a Martian shuttle, indicating comfort, and the idea that the crazy adventure he and his crew have been on since the pilot episode is coming toward a resolution.

Neither of these things are entirely true, but the characters act as if they are, and we learn something about it. The final shot of the episode shows Miller’s confidence proving singularly unhelpful as he’s kidnapped in a public place. Meanwhile, Holden and company’s apparent savior, Fred Johnson, is shown to the audience as a war criminal, responsible for the murder of several dozen defenseless miners and children. The dramatic irony is thick.

It’s not just props, either, it’s also writing, directing, and performing. Thomas Jane is the biggest name attached to The Expanse, but in the first four episodes, it was hard to tell why — Miller was little more than a hardboiled detective cliché in a thus-far relatively uninteresting setting, Ceres Station. But in “Back to the Butcher,” Jane gets the chance to shine. The way he stutters over the ship name “Anubis” — first pronouncing it “anibus” before moving to “anoobus” — suggests Miller’s aura of hyper-competence is a ruse.

Then, in the episode’s best scene, he meets with separatist leader Anderson Dawes (Jared Harris), with the two sharing a casual conversation where Dawes promises to hand over the man who severely wounded Miller’s partner. The scene is shot with the two men at a bar, both actors’ faces clearly visible, with Harris’ face expansive and friendly, even generous (“I assure you, the piece of trash who tried to crucify your friend is not one of our ranks. What’s worse, he’s not even remorseful!”) … up until Miller asks Dawes what he wants.

Suddenly, but not obviously, the entire tone of the scene shifts: Harris starts hiding his face relative to the camera and audience, and Miller seems more prominent. It’s clearly set up in a way that suggests Dawes’ reason — that he wants to know where Julie Mao is because she’s a friend to the movement — is utterly insufficient. Structurally this moment is great as well. It confirms to both Miller and the audience that Miller is correct, and Mao is somehow the key to everything in this story. It also suggests further mystery and a hook for the rest of the season: if the OPA wants Mao, then there’s more going on than anyone knew beforehand.

The Expanse is playing the long game. It’s shown us a mystery that it cannot possibly answer soon, but the longer it takes, the more difficult it becomes to make the resolution plausible. So along the way, it has to maintain our interest. With details like a lived-in world, characters who have simple human needs and foibles, it makes its setting seem solid. With strong sequences like the interrogation of the third episode and space battle of the fourth, it provides a short-term hook. But as it moves into the second half of its first season (of at least two, now), it’s become clear that this show has the detailed foundation to turn great — now it’s just gotta pull it off.