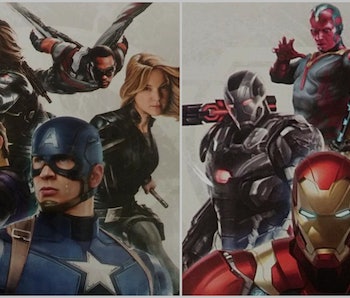 New promotional art over at Comic Book Resources clarifies the allegiances of two relative newcomers to the MCU: Sharon Carter (aka Agent 13) and Ant-Man. Both will side with Cap — which is fair, considering it’s his movie and all. Conspicuously absent, however, is the Scarlet Witch.

Though Sharon Carter (played by Emily VanCamp) was slyly introduced into the Marvel Cinematic Universe in 2014’s Captain America: The Winter Soldier, she was nowhere to be found in Age of Ultron. For his part, Scott Lang (Paul Rudd) was introduced in his solo Ant-Man last August, with a post-credits stinger that alluded to Falcon and Steve Rogers adding him to their ranks.

But despite being prominent in early trailers, Scarlet Witch (Elizabeth Olsen) is now absent from the roll call. She joined the Avengers at the end of Age of Ultron, and she’s definitely in Civil War. Will she have a change of heart halfway through the film? Does she go rogue and decide to sit out the conflict?

Every answer raises only more questions and we can’t wait for Captain America: Civil War to hit our screens come May 6.