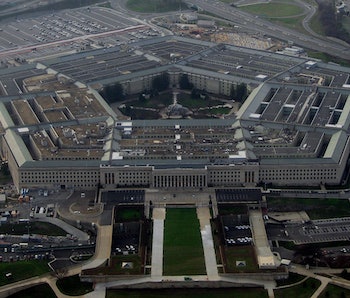 Officials from the Department of Defense and the American Psychological Association will meet again soon to hash out what exactly should be the role of psychologists in interrogating, and allegedly torturing, terrorism suspects.

The upcoming meeting, reported on Sunday by the New York Times follows the delivery of this request from the Pentagon to the APA that its psychologists return to Guantánamo Bay.

This summer, psychologists in the APA voted to prohibit its counselors from taking part in interrogation of prisoners at Guantánamo. On October 28, the APA sent a letter to the Pentagon letting the agency know that it would no longer be participating.

That ban resulted in real changes in December, when psychologists working in the prisons at Guantánamo packed up their bags. This step, Pentagon officials said, was to protect the licenses of the psychologists, which would be revoked had they continued to assist interrogators.

At the crux of it all was this report published in July, which makes the case that APA officials colluded with the Department of Defense over the psychology association’s ethics policy, massaging the rules so that psychologists who were involved in torture wouldn’t be found in violation.

The American military system has become reliant on psychologists — and it’s not ready to give them up.

Is there a role for psychologists in national security? In the Washington Post, psychologist Anne Speckhard argues that a complete ban is itself a breach of ethics. Psychologists, she says, have an “important and ethical role in guiding our governments to do the right thing.”

American psychology and American militancy have existed in tangent since World War II — government agencies began to fund psychological research, which in turn could be used as a tactical advantage. By 1955, the Office of Naval Research had supported more than 140 psychology research contracts, resulting in grants worth $2 million. According to A History of Modern Psychology in Context, in 1957 the APA hosted a “lavish banquet” in which it gave the Office of Naval Research a certificate of appreciation for ten years of support which “aided significantly in the advancement of science, and at the same time, in contributing to the national security.”

In the 1960s, psychology was taught as a science of prediction and control of behavior — a funneled view of psychology actively promoted by the U.S. military through its financial support. At a 1962 conference, military officials told psychologists that their research on population control met the “needs at the very heart of the counterinsurgency mission.” It was around this time that CIA funding began to be put toward research on the psychological aspects of torture, including extreme sensory deprivation, electroshocks administered to the brain, and psychoactive drugs.

“If students in American graduate schools in those days could be unaware of the powerful military influence on the psychology they were being taught … It was even more difficult to be aware of the influence of the financial largess that flowed from what has been called the ‘military-industrial-academic complex’ of that day,” writes Bruce Alexander and Curtis Shelton in A History of Psychology in Western Civilization.

The APA and the Department of Defense became even more entwined after 9/11.

“The APA looked at Guantanamo and other detention sites as opportunities for employment for psychologists and for psychology to become the discipline that the military would go to when learning how to acquire intelligence,” Dr. Frank Summers, who was one of the first to speak out against the APA’s involvement with the CIA, told Inverse in October. “At this time they were publicly arguing for the importance of psychology in the military while they were profiting from this very relationship.”*

It’s that relationship that is at the heart of the independent report that claims that the APA’s’s involvement in 2001-2004 interrogations provided the legal blanket that allowed the CIA to claim that its “enhanced interrogation program” did not constitute torture.

A group of military psychologists are advocating that this report does not accurately represent what happened, while other APA psychologists continue to emphasize that dismissal of the report is ignoring the “wealth of evidence that systemic military interrogation abuses continued long after the time when the authors claimed they were banned.”

While psychologists are still allowed to consult on broad interrogation policy, not being involved at all creates a dangerous scenario of unmitigated power by military officials when it comes to detention conditions for detainees. For now, psychiatrists have replaced psychologists at Guantánamo bay and provide the mental health treatment for detainees.

But Carson’s reasoning for why psychologists need to be involved in national security doesn’t seem to align with Speckhard’s opinion that psychologists are needed to patrol ethical boundaries. His statements in the Times speak much more to a belief that psychologists have a responsibility to do what they can to keep their country secure. But therein lies the rub: How can psychologists be sure that another Guantánamo won’t happen?

In the wars of the 20th century, psychologists in military situations were encouraged to “concentrate on winning, making all other values secondary until the war ends.” But, as pointed out by Alexander and Shelton in their book, in the 21st century, it’s more difficult to decipher the “possible effects of military involvement on professional psychology in a country that appears to be perpetually at war.”