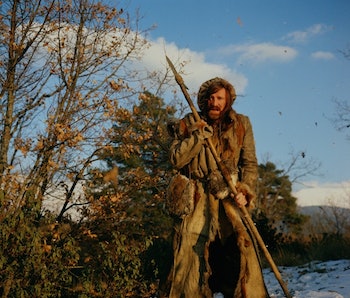 Let’s set the scene. A soft-spoken but intense frontiersman on an extended fur trapping expedition in the 19th century American wilderness gets himself mauled by a grizzly. Maimed but alive, he’s buried and left for dead by fellow trappers who soldier through the harsh, uncharted terrain without him. Yet the man lives, and literally crawls through the mountains to pursue revenge. You’ve seen that movie, right? But wait, we’re not talking about director Alejandro G. Iñárritu’s miserable Oscar darling The Revenant, the latest adaptation of the real-life story of woodsman Hugh Glass. Nope, we’re talking about another fictional account about Glass’ survival that was, pre-Revenant, all but forgotten. The 1971 film Man in the Wilderness tells basically the same story as The Revenant. Yet it does so with more emotion, more plotting, and ultimately, more heart.

Directed by Richard C. Sarafian — the filmmaker behind cult classic hot rod movie Vanishing Point — Man in the Wilderness is, like The Revenant, only partly inspired by Glass. Both take dramatic license with the story to varying degrees. For instance, the lead character of Man in the Wilderness (played by original Dumbledore himself, Richard Harris) is named Zachary Bass. It also doesn’t include the murdered son character so prominent to the plot of The Revenant.

But the left-for-dead story structure is basically the same, as are the characters who leave Glass/Bass to die. In The Revenant , Tom Hardy’s marble-mouthed Fitzgerald guts Glass’ son and bears the brunt of Glass’ hatred after leaving him to die. In Man in the Wilderness, John Huston plays the top-hatted, boisterous hunting party leader equivalent of Domhnall Gleeson’s Revenant character, Captain Henry. Like Fitzgerald, though, Huston is positioned as the villain who tells the men to watch Bass and kill him if he’s still clinging to life by morning.

Character similarities aside, Man in the Wilderness thematically has less in common with The Revenant than it does with, say, Castaway. It’s a somewhat obvious survival story that, like a lot of 1970s studio movies, tends to over-explain itself with specifics; it begins with a title card that reads, “What occurred on this expedition is historically true,” for instance. It’s also hopelessly cheesy at times, as when an obvious man-in-a-bear-suit attacks.

But give it credit: the narrative hand-holding in the 1971 movie is actually a refreshing departure from the overindulgent, pseudo-philosophical bullshit The Revenant uses to swaddle its audience. This isn’t to say you should take the easy way out and not have to engage with a quote-unquote “difficult” movie. It’s to say that Man in the Wilderness doesn’t have to resort to being obtuse and declaring itself a “difficult” movie to tell Glass’ story.

Man in the Wilderness is by no stretch a good movie. Large swaths of the runtime are dedicated to just showing Harris, who has about 20 words in the whole thing, walking or crawling from screen-left to screen-right. There’s a 3-minute sequence involving a bloodied Harris sneaking up on a Native American woman giving birth by squatting over a patch of brush, and there’s a 10-minute scene of Harris building a splint for an injured rabbit that culminates in the dynamic duo of frontiersman and cuddly beast just kind of hanging out and watching the fire he built for warmth. Riveting stuff. It does occasionally get as brutal and more real than The Revenant could ever dream, like a scene when Harris comes across an actual dying buffalo being eaten alive by a pair of wolves. Granted, this was because they shot the movie in Italy in the ‘70s where they could put anything short of snuff footage on-screen. Still. Bruh.

That brutality works in service to a greater story. By contrast, Iñárritu’s masochistic movie torments Glass gratuitously. It’s almost as if with each passing grisly sequence of The Revenant the director is grinding your nose in the world’s senseless brutality. Yes, great, thanks, Alejandro, we understand. Life is hard. And apparently so is writing dialogue.

Through a series of dream sequences in Man in the Wilderness we find that Bass rejects religion and abandons his son to go on the fateful expedition after the death of his wife. “I never much agreed with god’s will,” Bass says in one of his few actual lines. Even those simple stakes create more tension than the fungible revenge plot that supposedly propels The Revenant.

The climax, in which Bass confronts Huston’s character, defines why The Man in the Wilderness is a story about a man finding true redemption and forgiveness while The Revenant is just about a guy killing another guy. When given the fateful choice, Bass opts to return home rather than exact revenge. Leonardo DiCaprio’s Glass just stares into the camera as the credits begin to roll.

So take your pick. One is a largely forgotten spaghetti western-esque studio take on a survival movie, while the other will probably win best picture at the Oscars this year. I’ll take the one that’s streaming on Amazon already.

More like this
Entertainment
Jan. 23, 2023
Animalia is an alien invasion movie with metaphysical dreams
By Andy Crump
Entertainment
Jan. 25, 2023
Polite Society breaks the mold for the coming-of-age movie
By Andy Crump
Culture
Jan. 27, 2023
The Master was called a movie about Scientology, but it’s about so much more
By Dais Johnston
LEARN SOMETHING NEW EVERY DAY.
Related Tags
Share: