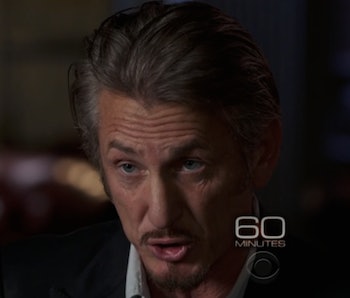 Tonight on 60 Minutes, Charlie Rose bore his teeth to a seemingly nervous Sean Penn. It was like the two switched personalities or something. The normally even-keel and brilliant interviewer asked the actor tough questions about his Rolling Stone interview with the Mexican drug kingpin and escaped prisoner, Joaquin “El Chapo” Guzman. Sean answered with a quivering voice, revealing that he felt his article failed because it didn’t spark the conversations he wanted it to about the War on Drugs policies. It did, however, appear to lead to the capture of El Chapo.

For some background, El Chapo is a guy who has done some unequivocally bad stuff. He then escaped from Mexico’s most secure prison two times, the last being this past July though a secret tunnel, some real life The Count of Monte Cristo-ness. And though both U.S. and Mexican law enforcement agents were sniffing around for him with great gusto, Penn found him first though telenovela actress Kate del Castillo, an object of El Chapo’s desire, who kept in touch with him through texts and social media. Yes, social media. El Chapo was captured before the Rolling Stone article even came out.

Rose grilled Penn on why he met with El Chapo. “I think the policy of the War on Drugs, which so deeply affects all of our lives, seems not to change,” Penn said. It seemed he wanted to present El Chapo as a human, not just a comic book villain. He wanted to do this through “experiential journalism.” He “spends time in the company of another human being” and simply observes that person.

Charlie was really like, again, why did you want to do that? Is it just for the attention? Penn said that because he isn’t involved constantly in defunct drug policies and failed rehabilitations, he feels “complicit” not thinking about “the suffering every day,” adding dramatically, “I find that equally complicit with murders in Juarez.” Heavy words for a slight man.

The motivating factor for this encounter was for him to have a conversation with the reader about the War on Drugs. Though Penn says he was fascinated by the aspects of why El Chapo has done what he’s done (i.e. murder), he thought showing a human portrait of the man was of utmost importance.

As to why he thought the drug lord agreed to this meeting, Penn said, “I was baffled at his will to see us.” He thought he may be putting himself at risk and noted that the Mexican government was humiliated by the escape and that someone else “found” him first.

“We’re not smarter than the DEA or the Mexican intelligence,” he explained, they just had the right contacts. And according to texts, El Chapo didn’t even know who Penn was, he was just hot for del Castillo.

They met with El Chapo once, and then he agreed to a formal meeting eight days later which never happened because it became too risky for the criminal. So Penn sent him mostly innocent questions, for which El Chapo recorded answers.

“My article should not have made this much noise. El Chapo should have not have been this popular a figure to read about,” Penn says. Then Rose asked him again if he did this to satisfy his own hungry ego. Of course he denied that.

Penn also denied being tracked by the government for the meeting. But Mexico’s attorney general said he and del Castillo were “essential” in this capture. Penn thinks the government wanted to put them at risk. But when asked if he feared for his life, he said, “No,” then kind of backtracked with an “I can’t say that there’s no risk.”

The most confusing moment in a pretty confusing interview was when Penn pointed out what he sees as the real problem. “I’m really sad about the state of journalism in this country. It has been [an] incredible hypocrisy and an incredible lesson in just how much they don’t know and just how dis-served we are.” Yes, media people, it’s us, we’re the bad guys, not El Chapo.

Penn is clear on the fact that people don’t like him, but was most fired up about the journalists who have said that he’s not a journalist. He fumed that he wants to see the license that makes them (us?) journalists. But, in poor form, it turns out he allowed El Chapo to approve his story before it went to press.

Penn believes his article has “failed” because everything that’s being talked about is not what he wanted people to be talking about. But in the next breath, he noted “how much time have they spent in the last week since this article came out talking about that” as a point in his favor. Rose dug into him about not being “naive” enough to think that Penn himself wasn’t a huge part of the story, the actor said that his problem isn’t that the public wants to know more but that it thinks it knows more.

Finally, Rose articulated what Penn was trying so hard and failing so badly at saying, that it’s not that he has regrets about his actions, it’s that he regrets that other people misunderstood what he did. And, man oh man, is that an easy thing to misunderstand.