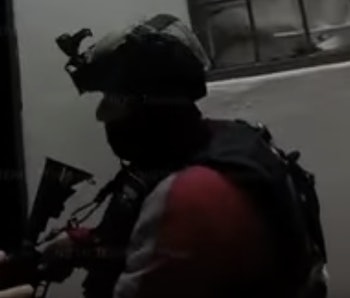 Joaquin Guzmán, or “El Chapo,” the infamous leader of the Sinaloa drug cartel, has become a real-life Bond villain, but on January 8, he was captured and the violent affair is on video, filmed by Navy commandos. It’s been watched on YouTube more than 2.5 million times.

It’s hard to do justice to the tumult of battering rams, machine gun fire and grenades while watching the video on a computer screen, but the consequences of this operation were very real: The raid saw seven cartel members arrested including El Chapo, in addition to two women found in a bathroom on the house’s second floor.

While we don’t see El Chapo himself in the video, CNN notes he slunk out of a secret passageway that led to a network of underground tunnels which allowed him to temporarily evade authorities. He then later stole a car with an accomplice, but was captured by authorities shortly thereafter.

El Chapo is currently being held at Altiplano Prison, the same facility he escaped in June via the underground tunnel. His future as a prisoner is currently uncertain, as he possibly could be extradited to the United States, where he faces a plethora of charges pertaining to years drug trafficking.