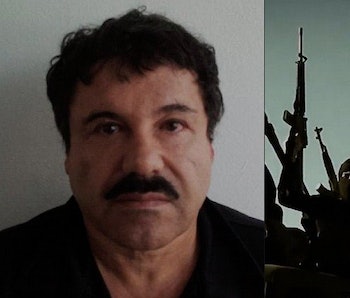 **Correction: It has been revealed the story that “El Chapo” of the Sinaloa Cartel crime syndicate emailing a threat to ISIS, is in fact a hoax.

_Writer Steve Charnock, tells the Inverse in an interview how he pulled it off — turns out it’s pretty easy.

Below is the piece ‘Inverse’ had published last night on the subject, in its entirety.

Joaquin “El Chapo” Guzman, leader of the Sinaloa Cartel crime syndicate, has directly threatened Abu Bakr al-Baghdadi, leader of the Islamic State of Iraq and the Levant, as reported by a blog that focuses on the activities of Mexican drug cartels.

“You [ISIS] are not soldiers. You are nothing but lowly p—-ies,” is how an email that Cartelblog.com has attributed from Guzman to al-Baghdadi opens, continuing, “Your god cannot save you from the true terror that my men will levy at you if you continue to impact my operation…. My men will destroy you. The world is not yours to dictate. I pity the next son of a whore that tries to interfere with the business of the Sinaloa Cartel. I will have their heart and tongue torn from them.”

As of this writing, there is no publically known response from al-Baghdadi or ISIS on the matter.

Cartelblog.com has expressed that the authenticity of the email is likely, by stressing that the unidentified blogger who brought the email to light “has intimate ties with actual Sinaloa cartel members, so it looks as if the warning is indeed legit.”

The blog explains that ISIS fighters have been destroying cartel drug shipments, although such information is not being readily reported elsewhere in the press.

An interesting twist: according to a January 2015 story by Public Radio International, this activity had caught the attention of Lebanese drug lord Ali Nasri Shamas, whose hashish factory is only approximately 30 minutes from Syria’s border with Lebanon. Apparently there is an ongoing belief in Shamas’s territory that ISIS would consider aggression against Shamas’s factory—to which Shamas has made it clear he’s more than prepared to unleash his own substantial arsenal of machine guns and rocket-propelled grenades against the Islamic State. Shamas told PRI, “This is for ISIS,” while showing a machete. He further explained his stance against ISIS, that it goes beyond simply defending his business: “We support every village in Lebanon…Christian, Sunni, Shia — whatever they are, we’ll defend them against these terrorists.”

As it turns out, there is a large population of Lebanese living in South America. A November 2012 report from the United States House Committee On Homeland Security, Subcommittee On Oversight, Investigations, and Management states that:

“With over eight million immigrants and descendants in Brazil and Argentina alone, South America is home to the largest Lebanese population in the world. Given these dynamics, it is understandable why South America would become such a large base of operations for Hezbollah.”

Hezbollah, the militant group and political party based in Lebanon, has a known relationship with Mexican drug cartels, as per the House Committee document:

“Hezbollah’s relationship with Mexican drug cartels, which control secured smuggling routes into the United States, is documented as early as 2005.”

Shamas is not known to be affiliated with Hezbollah, but it is clear that Lebanon and the Mexican drug cartels have a connection. Does this mean that El Chapo may actually have a network in place where he, his forces and his allies could actually somehow strike at ISIS?

This may all be conspiracy theory-type thinking, but the fact remains that—even if Guzman never truly threatened to attack ISIS in an email—the world is very interested in the possibility, as this story has made international headlines, and it’s unlikely to fade for the time being.