Why don't whales get cancer? 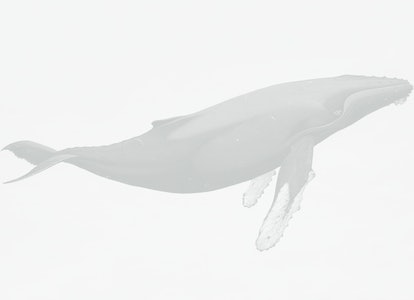 We marvel at whales for their beautiful songs, their longevity, and their at-times gargantuan size.

New research suggests their remarkable physique isn't simply an evolutionary offshoot: There's a medical miracle associated with their size. It's what helps these giants live for so long.

A study published Tuesday in the journal Proceedings of the Royal Society B analyzed tumor suppressor genes in two families of cetaceans. Cetaceans are marine mammals such as whales, dolphins and porpoises.

The researchers found a higher turnover rate of these genes was associated with greater longevity and lower incidences of cancer, among many other health benefits.

What animals do not get cancer?

Scientists have long puzzled over a phenomenon known as "Peto's Paradox."

The study team summarizes the paradox as: "Why do not larger organisms always have a higher risk of developing cancer than smaller ones?"

Theoretically, larger organisms have a greater number of cells. The more cells you have, the more cell division occurs. And greater cell division would normally be associated with higher incidence of cancer.

But this isn't what happens among many cetaceans, especially whales. Although cancer risk increases with age, many long-lived whales experience lower rates of cancer than other animals — and humans.

Previously, researchers have chalked up this paradox to good genes in whales that suppress cancer and other ailments.

However, the study authors note that certain whale species living for more than a hundred years would have been exposed to a number of dangerous pathogens. Hypothetically, this would increase the likelihood they would evolve genes enhanced to protect against these diseases. They write:

"Thus, it is expected that cetaceans developed improvements in their immune systems, DNA repair mechanisms and other biological processes which could act to favour greater longevity and body mass."

This team decided to examine exactly how these genes duplicate or turnover in whales, hoping this would help them understand the evolution of these helpful traits.

How they did it — The researchers studied genes in two types of cetacean lineages: Odontoceti (toothed whales) and Mysticeti (baleen whales).

Using DNA sequencing, they created a genetic map of these tumor suppressor genes in these whales, but also 15 other mammal species — including humans. The goal was to see how these genes compare and contrast across animals.

They also examined the relationship between these genes and body size, as well as how these genes influence human disease.

What's new — The researchers identified 71 tumor suppressor genes that were duplicated in the whales studied. Eleven of these genes correlated stronger with greater longevity.

These genes had a turnover rate that was 2.4 times faster than any other mammal, suggesting a link between high gene turnover and the evolution of these traits.

They found that an ancestor of the cetacean family carried an important gene known as CXCR2. This gene regulates immune function, DNA damage, and the spread of tumors. Baleen whales especially held a high number of tumor suppressor genes.

Many of the genes related to the halting of cell division (senescence), which correlates strongly with cancer suppression. The team writes:

"One of the main processes which has already been demonstrated to play an important role in ageing and cancer suppression is the irreversible arrest of normally dividing cells, or cell senescence."

The bowhead whale — the only animal known to live for more than 200 years — had the highest number of gene duplications. Conversely, bottlenose dolphins possessed far fewer tumor suppressor genes, correlating with higher risks of cancer.

Overall, researchers identified the positive natural selection or evolution of whale genes linked to regulation or suppression of the following human disorders.

"The increase in the number of copies of aging genes in cetaceans could provide additional protection against the development of several types of cancer as well as aging-related diseases," the team writes.

Why it matters — The researchers argue their findings serve as proof whales' large body size correlates to better health and a longer lifespan.

"These results provide evolutionary evidence that natural selection in TSGs could act on species with large body sizes and extended lifespan, providing novel insights into the genetic basis of disease resistance," they write.

Now that the researchers have established the significance of these tumor-suppressing genes, future scientists could use these findings to advance cancer and longevity research in a much smaller creature: humans.

What's next — While the results are promising, questions linger.

Further research is required to fully understand how the duplication of these tumor suppressor genes — and how their discovery could help with medical interventions for humans.

The researchers are already planning to focus their energy on these human-centric inquiries in future studies. As they put it:

"It would be interesting to investigate the effect of those conserved TSGs variants identified in whales in human cells. Such an avenue of investigation could eventually lead to an understanding of novel pathways that serve to improve the cellular mechanisms protecting against DNA damage, cancer and ageing."

For now, we can simply appreciate the majestic beauty of whales — and envy their good fortune.

Abstract: Cetaceans are the longest-living species of mammals and the largest in the history of the planet. They have developed mechanisms against diseases such cancer, although the underlying molecular bases of these remain unknown. The goal of this study was to investigate the role of natural selection in the evolution of 1077 tumour suppressor genes (TSGs) in cetaceans. We used a comparative genomic approach to analyse two sources of molecular variation in the form ofdN/dSrates and gene copy number variation. We found a signal of positive selection in the ancestor of cetaceans withintheCXCR2gene, an important regulator of DNA damage, tumour dissemination and immune system. Further, in the ancestor of baleen whales, we found six genes exhibiting positive selection relating to diseases such as breast carcinoma, lung neoplasm (ADAMTS8) and leukaemia (ANXA1). The TSGs turnover rate (gene gain and loss) was almost 2.4-fold higher in cetaceans when compared with other mammals, and notably even faster in baleen whales. The molecular variants in TSGs found in baleen whales, combined with the faster gene turnover rate, could have favoured the evolution of their particular traits of anti-cancer resistance, gigantism and longevity. Additionally, we report 71 genes with duplications, of which 11genes are linked to longevity (e.g.NOTCH3andSIK1) and are important regulators of senescence, cell proliferation and metabolism. Overall, these results provide evolutionary evidence that natural selection in TSGs could act on species with large body sizes and extended lifespan, providing novel insights into the genetic basis of disease resistance.