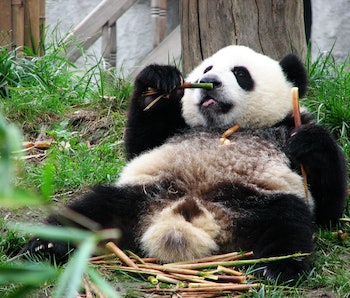 The life of giant pandas is strange, to say the least — and not just because they like rolling around in poop. What really puzzles scientists is how the massive herbivores maintain their hefty physique despite subsisting on a super-lean bamboo diet. According to a new study, part of their secret seems to lie in the microbes that reside in their guts. The gut microbiome isn’t just linked to complex dietary concerns in humans, but pandas, too.

In a study published this week in the journal Cell Reports, scientists analyzed the biological response of giant pandas and laboratory mice to assess how gut bacteria help the bears stay chubby year-round.

“This is the first time we established a causal relationship between a panda’s gut microbiota and it’s phenotype,” Guangping Huang, study co-author and a researcher at the Institute of Zoology, Chinese Academy of Sciences, says in a press statement.

How they made the discovery — In the study, the researchers first monitored captive and wild pandas. Both types of pandas ate bamboo leaves or shoots, depending on the season.

Following these observations, the research team transplanted feces from giant pandas into germ-free mice (rodents that have no microorganisms living on or inside them) in a process known as fecal microbiota transplantation. Some mice received the feces transplant from pandas during the leaf-eating season and others with feces from the shoot-eating season.

The goal of the transplants was to better understand the effect of giant panda gut microbes in another species that is easily studied in a laboratory setting.

The mice “provided a good model for studying the physiological significance of the naturally evolved gut microbiome,” according to the researchers.

What they found — The scientists discovered that the secret to pandas’ pudgy bodies lies in seasonal differences between shoot-eating season and leaf-eating season.

Pandas eat bamboo for much of the year, but there is a period where they forage on shoots rather than leaves. The researchers’ analysis of the lab mice after the fecal microbiota transplantation revealed how critical the shoot-eating period is for the giant pandas to maintain their robust figures.

The researchers found mice “transplanted with the microbiota from the shoot-eating season grew faster and stored more fat.”

Based on their experiments, the researchers drew two key conclusions about the relationship between the gut microbiome and giant panda health. First, they noticed that the bacterium Clostridium butyricum was “more abundant during shoot-eating season than during the leaf-eating season.” They also found that this bacteria from the shoot-eating season increased the amount of phospholipids — fatty acid chains that play an important role in metabolic health — a panda generates, helping to compensate for the lack of nutrition during the leaf-eating season.

Specifically, Clostridium butyricum creates a byproduct called butyrate that interacts with a gene that regulates the amount of phospholipids a panda’s body generates.

In other words: the panda’s gut is life-saving in that it builds up necessary substances during richer times so the mammal’s body can get by during leaner times.

Why it matters — This study isn’t just a fun discovery about the giant panda’s bodacious bod — it could also help us keep the species alive.

Although the giant panda was downgraded from “endangered” to “vulnerable” on the IUCN’s Red List of Threatened Species in 2016, the Chinese administration didn’t follow suit until 2021. The animal still remains vulnerable in the wild due to a loss of habitat and food, mostly because of deforestation and development.

A better understanding of the connection between the giant panda’s biology and its diet will give biologists another important tool to aid in its conservation.

“Identifying what bacteria are beneficial for animals is very important, because one day we may be able to treat some diseases with probiotics,” Huang says.

What’s next — The study has some important limitations that future research will hopefully clear up.

There are clear differences in the diet and physiology of mice and pandas. As such, “it may be difficult to reconstruct the entire gut microbiome of the pandas in germ-free mice,” according to the researchers.

It’s also challenging to conduct research on endangered or vulnerable species like the giant panda overall. But, hopefully, these findings will provide a stepping stone to more targeted research, thereby helping keep the giant panda off the endangered species list for the foreseeable future.

Abstract: Characteristics of the gut microbiome vary synchronously with changes in host diet. However, the underlying effects of these fluctuations remain unclear. Here, we performed fecal microbiota transplantation (FMT) of diet-specific feces from an endangered mammal (the giant panda) into a germ-free mouse model. We demonstrated that the butyrate-producing bacterium Clostridium butyricum was more abundant during shoot-eating season than during the leaf-eating season, congruent with the significant increase in host body mass. Following season-specific FMT, the microbiota of the mouse model resembled that of the donor, and mice transplanted with the microbiota from the shoot-eating season grew faster and stored more fat. Mechanistic investigations revealed that butyrate extended the upregulation of hepatic circadian gene Per2, subsequently increasing phospholipid biosynthesis. Validation experiments further confirmed this causal relationship. This study demonstrated that seasonal shifts in the gut microbiome affect growth performance, facilitating a deeper understanding of host-microbe interactions in wild mammals.